The advertisements aim to show the delivery executives commitment toward their work and serve the customers food on time and that every customer is a “star'' for them, the firm defended. 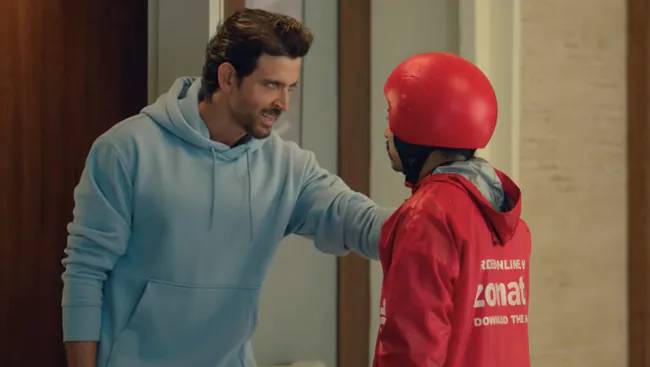 Food delivery app Zomato has got into a circle of controversy after it received negative feedback for its latest commercials featuring Bollywood actor Hrithik Roshan and Katrina Kaif.

Firstly, the firm has before been criticised for allegedly exploiting its delivery executives and now the advertisement has got netizens attention calling out the delivery aggregator for normalising a stressful work environment.

Zomato has addressed the issues viewers pointed out in the commercial.

Defending the ad, Zomato in its statement said, “We believe that our ads are well-intentioned, but were unfortunately misinterpreted by some people."

The advertisements aim to show the delivery executives commitment toward their work and serve the customers food on time and that every customer is a “star" for them, the firm upheld.

One ad shows a delivery agent surprised when he rings the doorbell and finds Hrithik Roshan. The actor asks for a selfie with him, however, the delivery executive is seen getting ready for the selfie until a notification on his phone notifies him of another delivery. The Zomato delivery partner is shown happily leaving the chance to click a selfie with the actor.

Katrina Kaif's ad plays out to be in a similar tone, where the actress instead asks the executive to wait for a piece of birthday cake, which the delivery agent forgo because once again his phone notifies him of another food delivery order to be delivered.

Social media users have slammed the firm for being deafly in times when the workers unfair treatment has caught huge attention. Many pointed out that the adverts suggested that the Zomato delivery agent don't get a minute to rest in between delivering orders while some said that the company is spending money by hiring celebrities for ads but won't pay their delivery partners with good and fair wages.

Zomato in a statement stated that the purpose behind the ad was to show that the delivery executive is “the hero of the ad".

It further added the ad concept was made six months ago, which was "long before any social media chatter around gig worker payouts/ working conditions."

The ad highlighted that people should respectfully speak with the delivery partners, raise the dignity associated with a delivery executive’s job and “demonstrate the pride" with which they work, read the statement.

"We believe that our ads are well-intentioned, but were unfortunately misinterpreted by some people," Zomato added.


The ad had not gone well with the people, as reactions showed how it tasted bad to them. One Twitter user wrote, “You're literally showing off how delivery partners don't have enough time to take a selfie and have to meet deadlines even when riding in the rain."

Another user wrote: “I thought that this normalised a stressful working environment where an agent can’t stick around for a couple of minutes for clicking a selfie with their favourite actor.

The company noted that they have witnessed chatters around gig workers and the unjust conditions in which they work. In the recent past, there have been demands for delivery platforms to take measures to safeguard the interests of their delivery associates, as they have complained of long working hours, impractical delivery timelines and unfair salaries.

Zomato further concluded its statement by saying that the firm understands that people “expect more and better” from them. "Our delivery partner Net Promoter Score has increased from -10% to 28% (and continues to rise). We will also, very soon, publish a blog post explaining why we think our delivery partners are fairly compensated for the work/time that they put in," Zomato added.