Zomato founder tweeted, “Never been so excited and indifferent at the same time.” 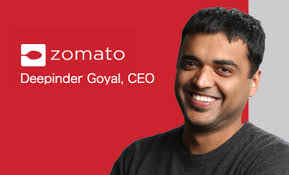 On Friday, Zomato has a blockbuster listing and soon after that a tweet from the food delivery application declared, “From one day to day one.”

Zomato has entered the stock market listing with a bang, on the first day it was valued at more than $1 billion (at 10:12 am), in no time. Shares of the food-delivering firm were opened at Rs 116 on the Bombay Stock Exchange (BSE), a premier of 53% over its issued price of Rs 76.

On this tremendous debut, Zomato CEO and Founder Deepinder Goel said, “The tremendous response to our IPO gives us the confidence that the world is full of investors who appreciate the magnitude of investments we are making, and take a long term view of our business.”

Shortly before the much-anticipated debut, Zomato CEO Deepinder Geol tweeted a photo of the board which read, “Proud of the past, Thankful for the present and Ready for the future” and as a caption, he wrote, “Never been so excited and indifferent at the same time.”

Zomato’s CEO has written a letter and called the listing “a new day zero” and also has given a shout-out to rival food-delivering firm Swiggy. He titled the letter “Letter from Deepi,” and it is posted on the official website of Zomato.

In the beginning, he stated that this is a big day for all of us. His letter read, “Today is a big day for us. A new Day Zero. But we couldn't have gotten here without the incredible efforts of India's entire internet ecosystem.”

He continued, “I'm a firm believer in India, and where our country will be in the future. India is a tough market to operate in, but if you are building to succeed in India, you are already exceptional. I say that because I believe Zomato and Swiggy are two of the best food delivery apps in the world today. We have a long way to go before we can call ourselves world-class by our customers' standards, but we are determined to get there.”

Zomato was launched in the year 2008 and it operates in more than 525 cities in India. It has partnered with around 3,90,000 small and big restaurants. He has written about his journey of 10+ years. He also mentioned that he had such decisions which have caused a lot of heartburn to the stakeholders.

His letter further read, “Our 10+ year journey has not always been smooth. We have lived through many ups and downs - something, not every company has the privilege of living long enough to do. I have made many decisions which have been good for the company, while some have caused our stakeholders a lot of heartburn.”