According to reports, Amitabh Bachchan's police bodyguard Jitendra Shinde was the subject of a departmental investigation. 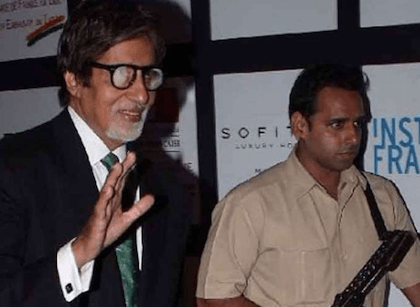 The legendary actor Amitabh Bachchan's police bodyguard, who had been following him around like a shadow for numerous years, has been transferred. The Mumbai Police took this step after rumours of him earning Rs 1.5 crore appeared online.
Also Read: Sonu Sood is ‘Desh Ke Mentor’: Kejriwal gov appoints actor as brand ambassador of mentorship programme
According to reports, Amitabh Bachchan's police bodyguard Jitendra Shinde was the subject of a departmental investigation. This investigation was launched shortly after news broke that he had earned 1.5 crore. Police in Mumbai wanted to know if he got this money from Big B or someone else. According to reports, Jitendra has told police authorities that he operates a security firm that offers personal bodyguards to other celebrities and well-known figures. Shinde informed the official that his wife operates the agency in her name and that Amitabh Bachchan did not pay him Rs Rs 1.5 crore, according to the report.
Also Read: Abhishek Bachchan hospitalized, Amitabh Bachchan, sister Shweta pay a visit at hospital to see him
Jitendra has been with Big B since 2015, and an officer cannot stay in the same area for more than five years, according to Mumbai police. As a result, Jitendra was transferred, bearing all of these issues in mind. For the uninformed, Amitabh Bachchan is an X security holder, which means he is constantly accompanied by two constables, one of whom was Jitendra.
Also Read: Dino Morea on playing devious character Shaybani Khan in The Empire: ‘An opportunity of a lifetime’
Jitendra Shinde, according to sources, has been moved to a police station in South Mumbai. He was usually by Big B's side and could be seen shooting scenes and attending events. There has been no response from Amitabh Bachchan on this issue so yet.
Recently the news was in the air that Amitabh Bachchan shot Chehre for free.
Yes! Yes, you read that correctly. Big B shot Chehre for free, which is why the veteran actor gets credited for his "friendly appearance" in the film for tax purposes. "To prevent any problem when completing the tax books we decided to provide the friendly appearance credits to Amit ji," Anand Pandit told in an interview when asked why Amitabh Bachchan did not charge a single penny for Chehre. "Sir was so professional and devoted that he even put his own money to commute," he continued.
Emraan Hashmi, Krystle D'Souza, Rhea Chakraborty, and others feature in the mystery thriller. The coronavirus epidemic forced the film's release to be postponed. Chehre, though, is finally hitting theatres on Friday that is today after a long wait.
When it comes to Amitabh Bachchan, he has a full schedule of films lined up for him. Jhund, a remake of The Intern, Brahmastra, Mayday, and Goodbye are among them. He is also the host of the reality quiz programme Kaun Banega Crorepati, which keeps him occupied all the time.
Stay tuned with True Scoop for more Bollywood updates.