Anuj Kapadia want to visit Anupama's dancing academy, but Paritosh stops him and tells him to stay away from his family. Read on. 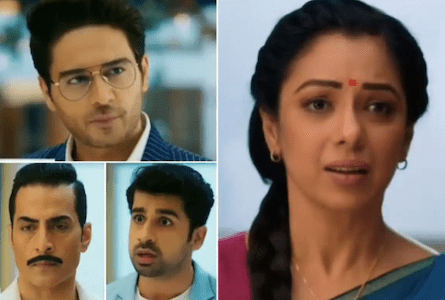 Anupamaa, a Star Plus show, has always kept fans hooked to the screen.

Gaurav Khanna, who plays the part of Anuj Kapadia, has recently joined the cast of the show. He is Anupamaa's former lover and a college buddy.While many members of the Shah family are opposed to Anupamaa and Anuj's friendship, others are completely supportive of Anupamaa.

Fans of Anupamaa will be pleased to witness the darker side of Anuj Kapadia in Monday’s show,  the wealthy businessman who is head over heels in love with her college buddy Anupama.

Actually, the café has no power, so the chef takes Anupamaa's help in preparing a meal.

Anupamaa prepares the meal before going to serve the customer, who happens to be Anuj.

When she sees Anuj at the cafe, she is taken aback. Anuj later discloses that he visited the home on the advice of his legal team. Anupama serves him the special dish, and he inspects the property before making his decision. Then, Anupama asks him to attend her neighbouring dancing academy, which piques his curiosity.

Also Read: Did you know Nick Jonas has watched all films of Priyanka Chopra? See which one his Fav

Paritosh arrived there and criticises him at the café and tells him not to get too close to the family.

This irritates Anuj, who interprets it as an insult and warns the Shahs about the probable implications, which include the cancellation of the major business deal and the loss of the possibility to collaborate on future projects. An enraged Anuj storms out of the café as Paritosh refuses to let Anupama show him around her dancing academy.

Paritosh, screams at Anuj as they both go towards the academy. He advises him that he doesn't need to form new relationships with his family members and that he should keep to exclusively professional matters. He then tells Anuj to go. Anuj makes it obvious to everyone that if he goes away now, he is also taking away the opportunities that may help the Shah family, but Paritosh continues to insult him.

It would be interesting to observe how Anupama and Anuj work together to find additional opportunities to meet and strengthen their relationship. Vanraj and Kavya's plans appear to be shattered at this point, and they'll have to come up with another way to catch Anuj's attention and get him to aid them financially.

Kavya, Vanraj and Rakhi were also present at the cafe.

Vanraj is already irked with Anupamaa and Anuj while Rakhi tries to add more fuel into it.

Paritosh is also embarrassed to see his mother in this situation.

Anuj said to Paritosh that he confronts him by stating that he will no longer purchase the café and would ensure that no one else does as well.

Everyone is tense, but Rakhi is enjoying the drama.

Anuj will really cancel the entire business deal with the Shahs in the upcoming episodes or will he buy the property? What will happen next?

Stay tuned to True Scoop for all the latest Entertainment news.