According to the NCB, there was enough evidence that Aryan Khan was in contact with people in other countries who looked to be part of an international drug racket. 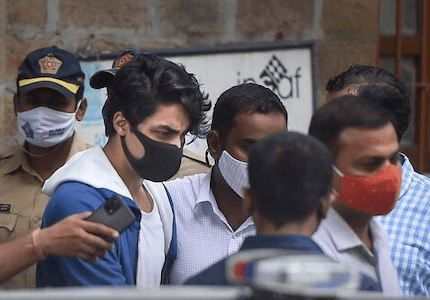 The Narcotics Control Bureau (NCB) denied actor Shah Rukh Khan's son Aryan Khan's bail application on Wednesday, claiming that he had a role in the illicit purchasing and intake of contraband and that there was adequate information that he was in contact with some individuals abroad who appeared to be part of an international drug network for illicit drug procurement.

Also Read: Know what Aryan Khan’s lawyer argued in court at today’s hearing
Drug trafficking is a major issue in today's society. At rave events, teenagers use drugs on a daily basis. It has a national impact."
He said that there was a particular reference to high volume in WhatsApp chats, which could not be for one's personal use. Mr. Aryan Khan and Arbaaz Merchant (both detained at Arthur Road Jail) had known each other for 8-10 years, and Merchant was caught with the contraband of 6 grames. It was intended for their intake, and Mr. Khan was aware of its possession. As a result, this would be considered conscious possession under the law. All of the substances used in substantial quantities were hard narcotics. So far, 20 individuals have been arrested, with four of them are drug peddlers.

He claimed that this constituted conspiracy under the NDPS Act's section 29 (penalty for abetment and criminal conspiracy). It was not essential to retrieve any commercial or intermediate quantities in a conspiracy. It was also unnecessary for all ten to be aware of what the others had done. On October 14, Mr. Singh will resume his arguments.
"Mr. Khan has a part in illegal purchase and consumption of contraband," the NCB said, challenging Mr. Khan's release. Mr. Khan allegedly used to get contraband through Mr. Merchant and sources connected to him, from whose conscious possession six grams of charas were seized.”
Mr. Khan's lawyer, prominent advocate Amit Desai, pointed out that there had been no discovery of contraband possession from him. "They are some young kids," he ended his case. These drugs are legal in several countries. We should not punish them. Let us not aggravate their situation. They've been through enough, and they've learned their lesson, if at all. They aren't peddlers, racketeers, or traffickers in the traditional sense. As a country, we have moved into a reformative State.   In 2001, the penalty for drug consumption was reduced from five years to one year."