As recession looms across the world in 2023, IMF calls 'India a bright spot on an otherwise dark horizon'; Here's why

The IMF's prediction slashed the growth rate of almost every country, however, its list showcased that India will be the only country that will cross the 5 percent growth mark in 2023. 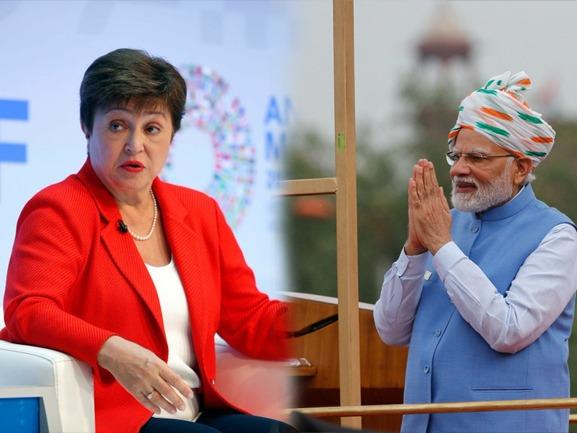 The International Monetary Fund (IMF) on Tuesday released the list of countries and their growth rate prediction for the year 2023. The IMF's prediction slashed the growth rate of almost every country, however, its list showcased that India will be the only country that will cross the 5 percent growth mark in 2023. Although International Monetary Fund (IMF) sharply lowered India’s economic growth forecast to 6.8% in its latest World Economic Outlook, compared to the 7.4% it had estimated earlier in July, citing the impact of external headwinds and weaker-than-expected second-quarter growth, it was the only country with growth more than 5 percent.

Furthermore, International Monetary Fund (IMF) Managing Director Kristalina Georgieva on Thursday called India a 'bright spot' on an otherwise dark horizon because of its fast-growing economy. Georgieva stated that the country's growth is underpinned by structural reforms. "India deserves to be called a bright spot on this otherwise dark horizon because it has been a fast-growing economy, even during these difficult times, but most importantly, this growth is underpinned by structural reforms," Georgieva said adding, "Among them is a remarkable success in digitisation in India. This has been indeed a huge factor in India's success."

India's economy is expected to shine at a time when the threat of recession is looming across the world. So, what actually the IMF forecast depict for India and the world? Let's understand in detail-

Currently, the financial year 2022 is going on and the IMF had predicted a growth of 6.8% to India. For the next financial year 2023, IMF has made a negative prediction for the world. IMF list states that India will grow at a 6.8 percent rate, and it is the only country in its prediction that will be growing above the 5 percent slab. The list shows Europe's economic powerhouse Germany will shrink by 0.3 percent. For the unversed, Germany is currently the fourth largest economy in the world and India is trying to surpass it in terms of nominal GDP. Therefore, Germany's shrinking economy and India's economy will indeed benefit the Narendra Modi government, however, seeing on a broader scale, the IMF prediction is indeed worrying.

In the list, most of the countries are not showing optimum growth at all except India. Therefore, in the upcoming 2023 financial, India's economic growth will be a motivator for other major economies of the world as well. Although few countries will be able to manage the inflation depending upon their foreign reserve, countries like Sri Lanka and Pakistan will indeed suffer. For instance- a person living in Pakistan will likely be bearing the pressure of 20 percent inflation. with GDP growth of 2 to 3 percent. As per IMF, inflation will rise to 8.8 percent globally, meaning it will impact almost every countries of the world.

Earlier, IMF had warned the world about recession and had predicted that the world could lose $4 trillion in economic output between 2022 and 2026 - worth the size of the German economy i.e equivalent to fourth largest economy in the world. As a result, the IMF has also stated that the 'worst is yet to come' in terms of recession or moreover economic collapse.

How the world's recession will impact India?

In India, retail inflation is 7.41 percent (September 2022 report) and in the future, it will hike even more. Retail inflation is increasing because in the world there is a food and energy crisis going on, courtesy of the Russia-Ukraine war. As per Goldman Sachs, the price of crude oil will amp up to $110 per barrel as Russia and OPEC+ have inked a deal saying that they will produce less oil. The impact of this is expected to be observed all over the world. Despite India getting crude oil at a discounted rate from Russia, the price hike will also impact the Indian economy apart from the world. Notably, US President Biden has warned of consequences to Saudi Arabia, and Russia over the OPEC+ deal. For the unversed, OPEC+ is a group of 23 oil-producing countries including Russia and Saudi Arabia.

The increase in the price of oil, will increase India's current account deficit, and decline the Indian rupee more to 84.85 per dollar by March next year. For those wondering, if lowering of rupee might help amp up India's export, the answer is no. The reason because, the currency value of all over the world will be decreasing, and therefore, it won't amp up India's exports.