A sad outcome of the match, and the Europa League now appears to be a viable option. 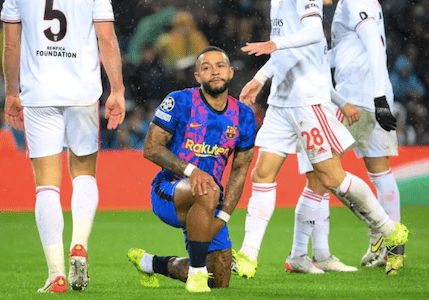 Barcelona missed out on a wonderful opportunity to qualify for the Champions League knockout rounds, and their European fate will be decided in the last group stage match due to a 0-0 draw against Benfica at home.

Barça had the better of the game for the majority of the 90 minutes and had a couple great chances, but they were unable to break down a resolute Portuguese defence. To avoid being relegated to the Europa League, the Blaugrana must now win against Bayern Munich.


FIRST HALF
Barça started with a back three, two holding midfielders, and virtually a forward five, putting a lot of pressure on Benfica and looking to control possession and make many of runs in behind to attempt and break down the Eagles' defense.
Nico González was the major motor of Barça's attack, driving the ball from back to front on several occasions and opening up a fantastic chance for Jordi Alba, but the full-back was unable to past Vlachodimos in what was Barça's clearest opportunity.

In the first half-hour, Benfica did very little in attack, but in the next 10 minutes, they surged into the game, and Nicolás Otamendi scored an incredible goal to put them ahead, only to have it ruled off because the corner went out of play in the buildup. Barça came out strong in the second half, and Yusuf Demir came close to scoring a fantastic curler into the top corner, but the ball struck the crossbar.
A tight and extremely intense game was goalless at halftime, but Barça appeared to be the superior team heading into the second half.
SECOND HALF
Benfica understood that a draw would be a fantastic result, therefore they played the second half to get it. The visitors were cautious about how many players they put forward, and they defended aggressively to prevent Barça from launching any serious attacks. They also wanted to squander as much time as possible, avoiding any disturbance in the rear and perhaps finding a winner at the counter.
Barça didn't exhibit the intensity they required early on, but as the game approached its last 30 minutes, they began to apply more pressure. With 25 minutes remaining, Ousmane Dembélé came off the bench, aiming to influence the game with his pace and talent, and the Frenchman made an immediate impact with a brilliant cross to Frenkie De Jong but his header was brilliantly saved by Vlachodimos.
As we approached the last ten minutes, Benfica had completely parked the bus, and Barça never grew desperate, instead trying to methodically construct a scoring opportunity. They scored when Jordi Alba's brilliant pass found Ronald Araujo inside the box for a superb volley, but the goal was disallowed because Araujo was slightly offside.
The Blaugrana never gave up and did their hardest to find a winner, but time ran out and the final whistle blew, bringing an end to a sad evening for Barça. Because Benfica will be heavy favourites against Dynamo Kiev at home in the last matchday, Barça will very certainly require a win away to Bayern Munich, and the chances of that occurring are low.Barça's first two losses have finally caught up with them, and a place in the Europa League knockouts now appears to be a distinct possibility.