Byju's is one of Shah Rukh Khan's greatest sponsorship deals, and he is also the face of a number of companies, including Hyundai, LG, Dubai Tourism, and Reliance Jio. 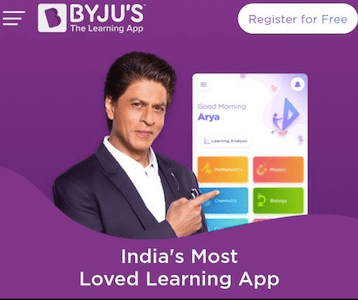 Due to the current investigation into his son Aryan Khan in a drug bust case, ed-tech giant Byju's has hold on all advertisements starring Bollywood actor Shah Rukh Khan.  According to a report in theleading daily Byju's has halted all advertising for which it has taken advance bookings in the previous few days after facing backlash on social media platforms such as Twitter.

While Byju's is one of Shah Rukh Khan's most valuable sponsorship deals, the megastar is also the face of big companies like Hyundai, LG, Dubai Tourism, and Reliance Jio.
Also Read: Aryan Khan’s Bail Plea rejected, SRK’s son, 7 others sent to judicial custody for 2 weeks

According to a leading daily report, Byju's pays Khan Rs 3-4 crore each year to endorse the company. Since 2017, the actor has been a brand ambassador for the brand.
Byju's, India's largest startup, has seen significant development in recent years, with a slew of acquisitions including Aakash Facility, a brick-and-mortar coaching institute.
According to the source, Byju's pulled SRK advertisements because the firm did not want to be linked with the actor because of the situation surrounding Aryan Khan's drug case. However, it is unclear whether the firm has completely dismissed the actor as a brand ambassador.
In April, Byju's was valued at $16.5 billion, and it is said to be in negotiations with investors to raise $1.5 billion at a valuation of $20-21 billion. According to the IIFL Wealth Hurun India Rich List 2021, the company's founder Byju Ravindran and his family are worth Rs 24,300 crore.
Last week, Aryan Khan and seven others were arrested in a narcotics raid on the cruise ship 'Cordelia,' which was travelling from Mumbai to Goa. According to a leading news agency , undercover Narcotics Control Bureau (NCB) sleuths seized 13 grammes of cocaine, 21 grammes of hashish, 22 tablets of MDMA, and 5 grammes of MD during the raid.
The 23-year-old has been denied bail and will spend the weekend at Mumbai's Arthur Road jail. His bill plea was also refused; the court ruled it was "non-maintainable" on Friday, agreeing with NCB that because narcotics were seized, the matter should be heard by a sessions court. No narcotics were found on Khan's person, according to the NCB. However, his WhatsApp conversations were incriminating, and the anti-drug agency said he was supplied narcotics by Archit Kumar, another individual arrested in the raid.