Says, Punjab government stands firmly with the farmers, elaborate arrangements put in place in all 78 purchase centres in district for smooth procurement 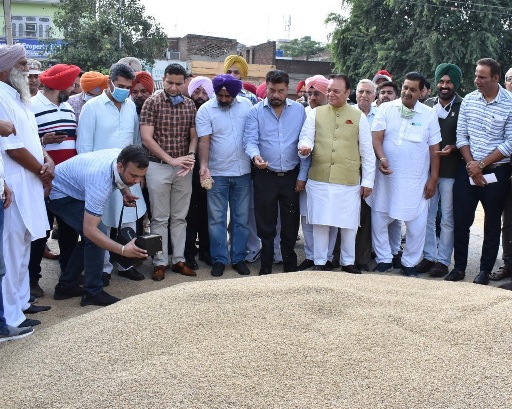 Accompanied by Member Parliament Chaudhry Santokh Singh, MLA Avtar Henry Junior, Deputy Commissioner Ghanshyam Thori, the minister said that as many as 10 lakh metric tons paddy was expected to arrival in the grain markets in Jalandhar adding that the state government was committed to procure every grain of the produce because it was the fruit of six months of hard work of the farmers. “Punjab Government has made all out arrangements for the smooth and uninterrupted procurement of paddy crops in all the Mandis of the state”, he mentioned.

Also Read: Punjab DGP to be appointed only on basis of Center's Panel, says Punjab CM

He added that there was sufficient availability of gunny bags besides proper arrangements for lifting and payment were already made in all the purchase centers where farmers will get the payment of their produce within stipulated time-frame. Mr. Singh appealed to the farmers not to set fire crop residue in the fields as it will exacerbate COVID situation in the state and bring only dry produce to the mandis for easy and hassle-free procurement.

Interacting with media persons, the minister thanked Chief Minister Charanjit Singh Channi after whose personal efforts immediate procurement could be started, thereby giving a sigh of relief to farmers in the state. Earlier, Mr. Singh interacted with the representatives of Arhtiya Association and officials of various procurement agencies.

Meanwhile, Deputy Commissioner Ghanshyam Thori said that a total of 78 purchase centers were set up in the district where elaborate arrangements were put in place to ensure procurement in a hassle-free manner. He said that the district administration would leave no stone unturned to facilitate farmers during the whole procurement operations. The DC further added that as many as 3610 metric tons paddy has been arrived in Jalandhar including 610 MTs in mandis falling under Adampur market committee, followed by 1087, 644, 510, 297, and 70 MTs in Bhogpur, Jalandhar City, Lohian Khas, Mehatpur, and Shahkot market committees respectively. He said that all the officials were asked to ensure timely procurement, lifting and payment of crops as any kind of laxity in this task would be dealt with heavy hands.