IPL 2021: Chennai Super Kings won by six wickets over SunRisers Hyderabad on Thursday to become the first team to qualify for the playoffs.

Chennai Super Kings, led by MS Dhoni, defeated SunRisers Hyderabad by six wickets on Thursday to become the first club to qualify for the Indian Premier League playoffs this season (IPL). MS Dhoni, the veteran, finished the match in his own special style, with a maximum to clinch the victory for his team. With that outcome, SRH is officially eliminated from contention for a playoff spot. Faf du Plessis and Ruturaj Gaikwad contributed with the bat to keep themselves in contention for the Orange Cap, which is currently held by Shikhar Dhawan.
Also Read: IND vs AUS women: Smriti Mandhana scores career best 80*, Rain stops Pink Ball Test
IPL 2021 Points Table
With a six-wicket win over SRH, Chennai Super Kings qualified for the playoffs. After a poor showing in last year's IPL, MS Dhoni's team has made a stunning comeback this year. 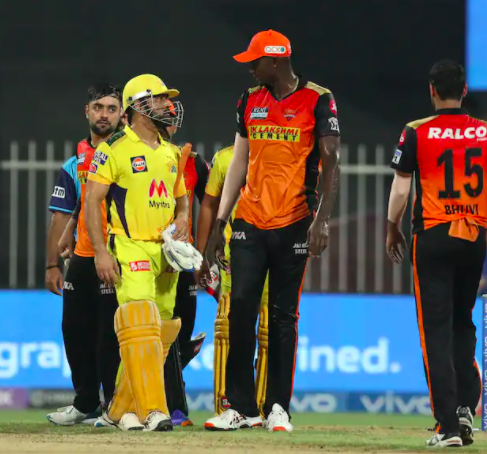 With 18 points after 11 games, they are in first place in the standings. With 16 points from the same number of games, the Delhi Capitals are in second place.
Also Read: Rohit Sharma on Pakistan streets? See how Netizens reacted to hitman’s doppelganger
RCB is currently in third place with 14 points after 11 games.
After 11 matches, both KKR and Mumbai Indians are tied for fourth place with 10 points each.
Punjab Kings and Rajasthan Royals are in sixth and seventh places, respectively, while SRH is at the bottom.

Orange Cap Race
Shikhar Dhawan continues to lead the pace with 454 runs from 11 matches, followed by Sanju Samson with 452 runs from 11 games.
With his 41-run effort against SRH, Faf du Plessis moved over KL Rahul to third place.

Purple Cap Race
After match 44 of the IPL 2021, there was no significant change in the list of leading wicket-takers. With 26 wickets in 11 games, Harshal Patel retains the Purple Cap.
Avesh Khan, who has 18 scalps, is behind him. After 11 matches, the Delhi Capitals bowler is followed by Jasprit Bumrah (16 wickets), while Mohammed Shami and Rashid Khan both have 14 wickets.