Dabur’s bold ad for Karwa Chauth has Twitter in uproar. Know why 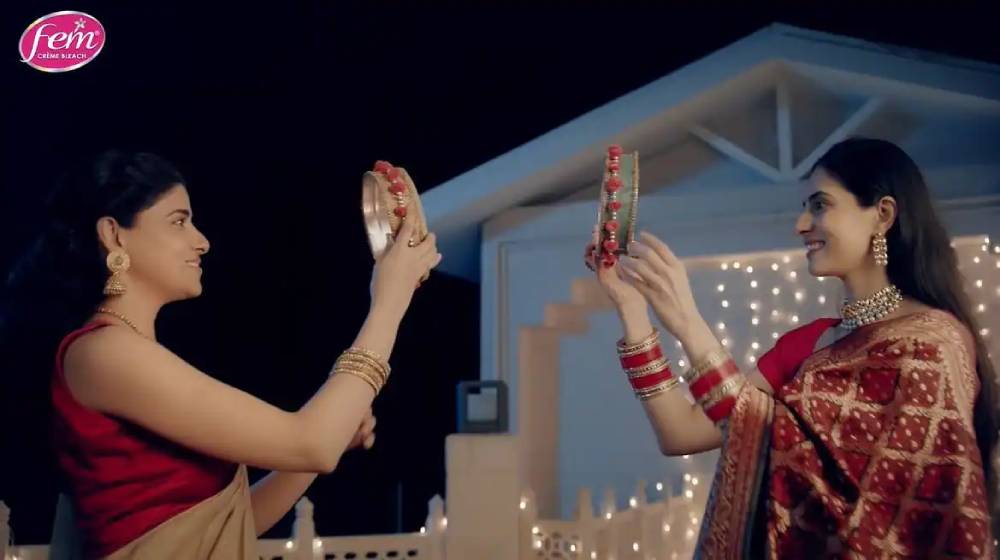 As festive season is upon us, brands are coming up with commercials promoting their products, however, in recent days several brands have caught themselves in controversy of insulting Hindu sentiments. And amongst the latest is Dabur that has caught the eyes of religious protectors.

Ahead of Karwa Chauth 2021, Dabur released its Fem Creme Gold Bleach advertisement featuring a lesbian couple celebrating Karwa Chauth. The commercial shows two women getting ready for the festival while applying the Fem bleach as they discuss the importance of the festival and the reason behind it. Further in the advertisement, another woman joins them and is seen giving each one of the women a saree to wear for the occasion. Towards the end, both women are seen facing each other with the traditional sieve and a decorated puja thali and water, making it clear that they are each other’s partners and in a same-sex relationship.

The ad aims at promoting love and inclusivity however, it ended up dividing social media users promoting one section to boycott the brand as they see the ad as an insult to the Hindu festival whereas the other section is calling it a progressive one.

Many praised the company for pro-LGBTQ commercials promoting same-sex couples and relationships, while it also drew flak from others who have accused the brand to hurt cultural sentiments and defaming the Hindu religion.

As the advertisement went viral on social media users flooded the comment section with reactions, on the other hand, some people were also irked by the presence of obsession with a fair complexion.

A user who seemed impressed by the ad wrote, “Well done, Fem/Dabur! A nice film for a traditional, often-criticized festival by an otherwise conservative brand.”

Many shared the video on their Twitter accounts and posted their reactions, terming it offensive. “WHY these kinds of woke experiments are being deliberately done only with Hindu Festivals & traditions??”, wrote a user. “Dabur nahi BABUR hain ye behrupiye. Not gonna purchase any of its products. Neither my friends & family. Sabko dikha diya ad inka.”

“This advt is not in good taste. You must learn to respect Hindu sentiments while using the festive occasion for advertising your products” and many such comments were fired by the netizens.

Another wrote, “Why are they defaming Hindu rituals by showing western ideas? This is against our culture.”

"Mixed feelings about this one - accepting non-traditional relationships is good, but then promoting a misogynistic tradition and also spreading the 'fair is beautiful' trope,” said another user.

“It is great to see that inclusive ads can be made only with Hindu festivals and traditions as Hinduism doesn’t discriminate and accepts all,” another user had to say.
Meanwhile, there was a portion of people who praised the advertisement and posted comments like, “That’s cute.. I love it.. I hope one day we can change people’s mentality. Just be them real”, “I cant believe this. Literally warms my heart”, “We stan pride!!! We cherish pride!! We loved pride!! Amazing ad, seriously!” and more.
There were a few who highlighted how Indian society so obsessed with fair skin and showed their displeasure, hitting the brand for promoting fair skin in their commercial. A user wrote, “What I find offensive is that these women are using a skin whitening product as part of their beauty preparations. Brown women, your skin is BEAUTIFUL the way it is. PLEASE do not engage in this unhealthy practice. Yes, I am all for supporting our LGBTQ community. However, isn’t it ironic that this so-called “progressive” ad is for skin whitening?”.

This is the third brand that has sparked controversy within a week with their festive-related commercial the other two being FabIndia’s new Diwali collection ‘Jashn-e-Riwaaz’, tyre major Ceat Ltd in which actor Aamir Khan is seen suggesting people to not burst crackers on road. People have accused these brands of deliberately humiliating Hindu sentiments and have called to boycott their products.