"Didn't Want To Be Part Of”: Krushna Abhishek Refuses to Shoot with Govinda, Sunita Ahuja in ‘The Kapil Sharma Show’

"I'm sure the audience is looking forward to my performance when Govindaji appears on the show," Krushna Abhishek remarked in the interview. 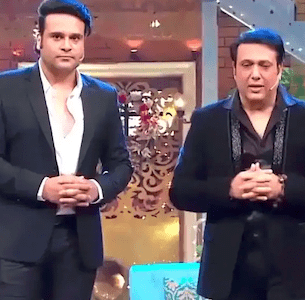 Krushna Abhishek, an actor and comedian who has a tense relationship with his uncle Govinda, stated he opted out of an episode of The Kapil Sharma Show to avoid any awkward situations. On a future episode of The Kapil Sharma Show, Govinda and his wife Sunita Ahuja will appear.
Krushna Abhishek revealed in an interview with the leading daily that when he found out Govinda would be a guest on an episode, he decided not to be part of . "I've been shuttling between Raipur and Mumbai for the past 15 days to shoot for my film and Kapil's programme," he says. I would always go above and beyond to change my show dates. However, I didn't want to be a part of it when I found out they'd be appearing as celebrity guests in the next show, so I didn't try to change my dates.”
Also Read: Archana Puran Singh reveals Sumona’s participation in the show; rumors about exit ends
"I feel both parties do not wish to share a stage," Krushna Abhishek said in his interview.

Krushna Abhishek explained that because it's a comedy event, he didn't want to risk offending Govinda with his comments. "I'm sure the crowd is looking forward to my performance when Govindaji is on the show, but I decided it was best not to perform. Things between us are still the same, and issues haven't been handled," Krushna added, setting the record straight.
Also Read: The Kapil Sharma Show is all set to return again on Sony TV with its new ‘fun-filled’ season
It all started a few years ago when Govinda and his wife Sunita Ahuja were allegedly referred to as "people who dance for money" in a social media post by Krushna Abhishek's wife Kashmera Shah after they appeared as guests on Krushna's TV show Drama Company. In interviews in 2019, Krushna stated that they were to blame and that they wanted to make reconciliation with Govinda, however Sunita told the leading daily, “We've broken all relations with Krushna and Kashmera, and I vow I'm not going to try to patch things this time. Two years ago, I was a fool for doing so. Govinda was correct in his assessment of them. It was my mistake in thinking we should give them another chance.”

On The Kapil Sharma Show, Krushna Abhishek has been a regular. Bol Bachchan, Entertainment, and Kya Cool Hai Hum 3 are among his film successes.