Disha Patani took a mirror selfie in an elevator. 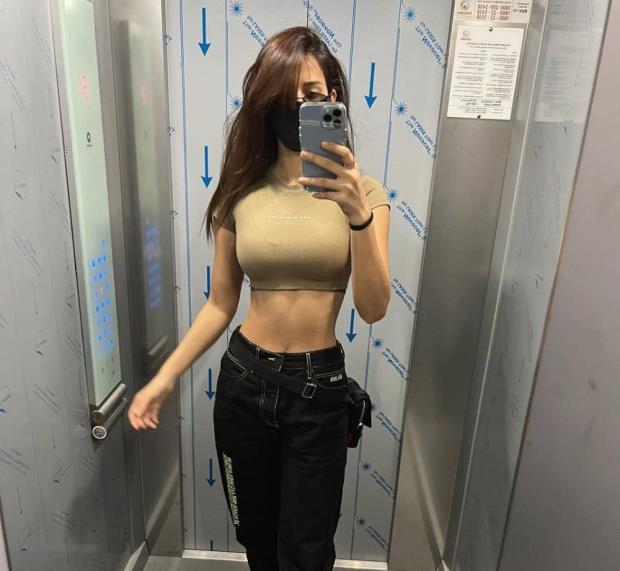 Bollywood actress Disha Patani has one of the best bodies in the tinsel town. Crush of the country as she is known keeps her social media followers updated about her daily activities.

An avid social media user, Disha’s social media accounts are filled with either her beautiful pictures or workout and gym videos.

On Sunday, the actress posted a mirror selfie on Instagram where flaunted her toned abs. In the picture, Disha is wearing a beige coloured crop top which she paired with black pants with a pair of shoes, tinted glasses. She chose to keep her hair open. The picture is taken from inside an elevator. The actress seems to be following Covid-19 safety protocols by wearing a face mask that matched her outfit.

She shared the same photo on her Twitter account as well captioning it with a flower emoji.

Disha Patani was recently vacationing and has been sharing glimpses from her beach days. In one of the vacation pictures, The Radhe girl was seen flaunting her flowery printed short dress as she soaked sunlight and walked on the beach.

Disha’s name has been constantly in the news for her much talked about relationship with Tiger Shroff. Both actors keep commenting on each other’s Instagram posts and Disha has been spotted with Tiger’s sister Krishna and mother Ayesha several times. Last month they were snapped by the photographers as they were coming out of the special screening of the Hollywood film Venom: Let There Be Carnage. Disha, Tiger and his sister all left the venue of the screening in the same car but none of them confirmed the relationship.

Professionally, Disha has been busy with her upcoming feature in Mohit Siri’s directorial Ek Villain Returns starring alongside Arjun Kapoor, John Abraham and Tara Sutaria. The film will be the second collaboration of her with director Mohit Suri as earlier she had worked with him in 2020 in the film Malang starring Aditya Roy Kapoor, Anil Kapoor and Kunal Kemmu.