ug Jug Jeeyo will see Varun Dhawan and Kiara Advani teaming up for the first time. The film is being directed by Raj Mehta of Good Newwz fame 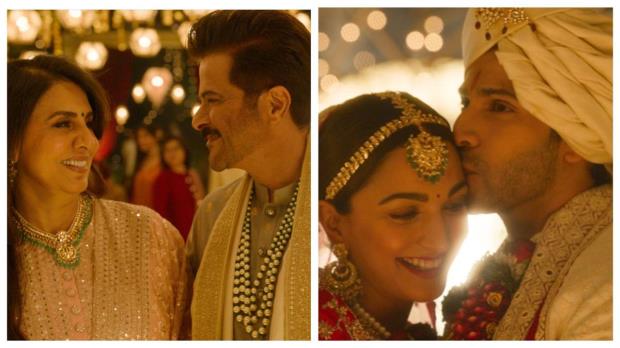 ‘Jug Jugg Jeeyo’ is an upcoming comedy-drama film that will mark Varun Dhawan and Kiara Advani’s first on-screen collaboration. The movie will also star Anil Kapoor and Neetu Kapoor playing lead roles and will mark the latter’s return to the big screens after a long break.

Produced by Dharma Productions, the director of the movie is Raj Mehta. Last week, the ‘Yaarana’ actress also updated her fans that she had finally wrapped up shooting for this movie which she started shooting after her husband Rishi Kapoor’s death last year. Neetu Kapoor also shared her look from the movie in different Instagram stories. Varun Dhawan and Kiara Advani are teaming up for the first time in the film Jug Jug Jeeyo. The film now has a release date and it will be out on June 24. Karan Johar took to Instagram to make the announcement. He wrote, “Jug Jugg Jeeyo coming to cinemas on 24th June 2022! Come, celebrate family with us.”

Varun Dhawan also seemed excited about the film’s release. Sharing the release announcement video, he wrote, “Family is everything ❤Issilye #JUGJUGJEEYO! Coming to take over the cinemas near you on 24th June 2022.” Earlier in the day, Varun had shared a memo of Amrish Puri which had ‘Jug Jug Jiyo Beta’ was written on it. “Gonna announce the release date today at 4 pm tab tak,” he had written.

Earlier today, the entire cast of ‘Jug Jugg Jeeyo’ sat down for a video conference to reveal the release date of this upcoming comedy family drama. They can be seen conversing about Karan Johar and the upcoming movies under his banner when Neetu stops everyone and tells them to speak only about their film ‘Jug Jugg Jeeyo’. Neetu shared the video on her Instagram and wrote, “The age of bad internet and so much confusion! But we got this, stay tuned because we’re announcing at 4 pm!”

Kiara also shared the post on her social media and wrote, “The chaos won’t stop until we find out the release date of #JugJuggJeeyo! Only a few hours to go, stay sharp and see you at 4 pm!” Meanwhile, other than these brilliant casts of actors, ‘Jug Jugg Jeeyo’ will also feature Manish Paul and Prajakta Koli in pivotal roles.

Also Read: ‘Khoya Paaya’ song from ‘Dhamaka’ is music to the ears