On the occasion of Rishi Kapoor's birthday, filmmaker Farhan Akhtar has released the first poster for Sharmaji Namkeen, his final film. 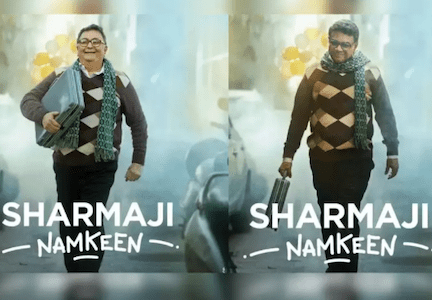 Rishi Kapoor passed away on April 30th of last year. At that time, shooting of the film 'Sharmaji Namkeen' was pending.  The filmmakers opted not to discontinue the film even after Rishi's death. Paresh Rawal shot the rest of Rishi's portion, and the film was finished.

Last month, actress Juhi Chawla, who plays a vital part in the film, stated that it would be released on September 4 as a tribute to Rishi Kapoor, but no decision has been made on whether or not multiplexes and theatres would be opened in Maharashtra. As a result, the film's release has been postponed for the time being.
Also Read: Sidharth Shukla’s Funeral: Celebrities slams paparazzi, angry with Shehnaaz’s coverage on Siddharth’s death

However, Honey Trehan, a producer on the film, told True Scoop News that due to the epidemic, the film's advertising and publicity is impossible. We spent a lot of time arranging its distribution since this film is a tribute to Rishi ji and must be presented in that manner only.

The narrative follows a 60-year-old guy who want to live a new life after retirement. Rishi Kapoor, too, was desperate for this project.

The film was scheduled to be shot in Delhi in January of last year. Ritu Nanda, Rishi Kapoor's sister, died at the same time. Despite this, Rishi ji did not postpone the filming. He stated that his personal life should have no impact on the film. He had responded, "The show must go on," recalling his father Raj Kapoor's lessons. 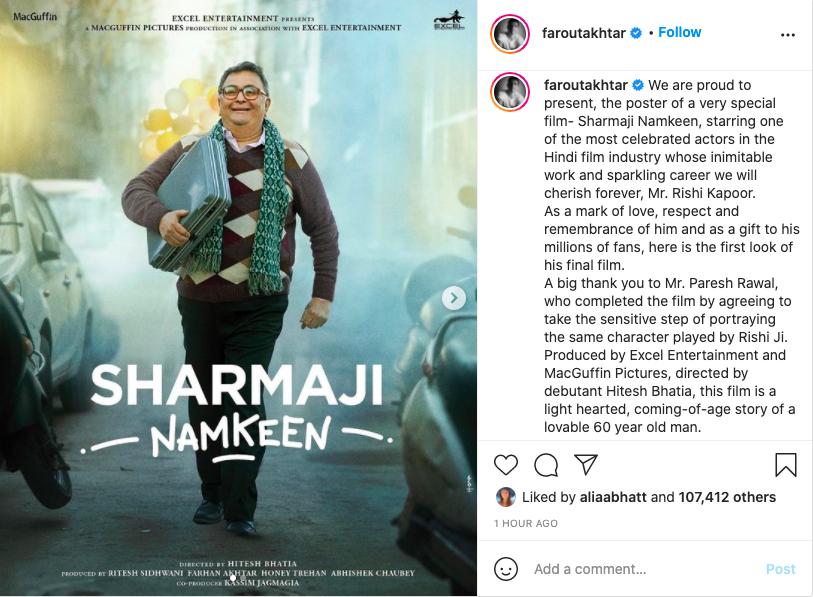 On the occasion of Rishi Kapoor's birthday, filmmaker Farhan Akhtar has released the first poster for Sharmaji Namkeen, his final film. Following his demise in April of last year, actor Paresh Rawal took over to finish the film.

Riddhima Kapoor, Rishi Kapoor's daughter, also shared a poster from her father's most recent film. Riddhima wrote, sharing posters featuring both Rishi and Paresh in similar outfits. “We are proud to present, the poster of a very special film- Sharmaji Namkeen, starring one of the most celebrated actors in the Hindi film industry whose inimitable work and sparkling career we will cherish forever, Mr. Rishi Kapoor. As a mark of love, respect and remembrance of him and as a gift to his millions of fans, here is the first look of his final film.”

She also thanked Paresh Rawal for completing the movie. “A big thank you to Mr. Paresh Rawal, who completed the film by agreeing to take the sensitive step of portraying the same character played by Rishi-ji. Produced by Excel Entertainment and Macguffin Pictures, directed by debutant Hitesh Bhatia, this film is a light-hearted coming-of-age story of a lovable 60-year-old-man.” 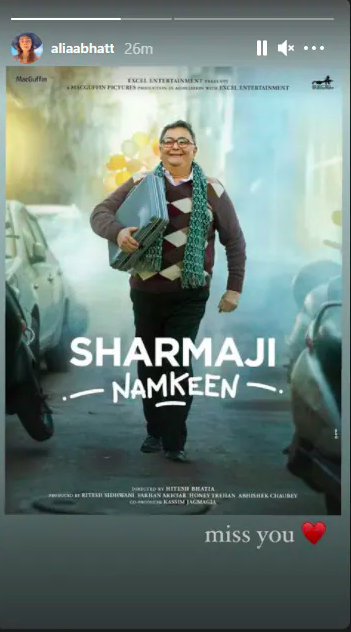 Alia Bhatt shared the poster of a film with a special message for Rishi Kapoor. 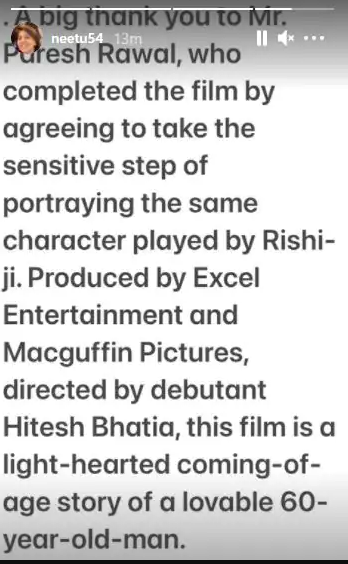 The release date for Sharmaji Namkeen has yet to be announced.

After a two-year struggle with cancer, Rishi Kapoor died on April 30, 2020. His wife, actress Neetu Kapoor, also posted a tribute to Rishi and their final days together. “I learnt a lot from Rishi Ji during our last few traumatic years in NYC .. how we celebrated when his blood counts were high .. we dined shopped laughed .. in his lows we just stayed home watched tv ordered in amazing food n still had some wonderful moments in hope that the next round of chemotherapy he would be better .. hope n being strong is what he taught me .. value each day .. we all miss him today !!! I can picture him how excited he would have been for his 69th birthday !! I’m sure he is celebrating with his family up there. Happy birthday Kapoor Saab,” she wrote.