While the sale of all beer with alcohol at the eight World Cup stadiums was banned, non-alcoholic beer was still made available at the 64 matches in the country. 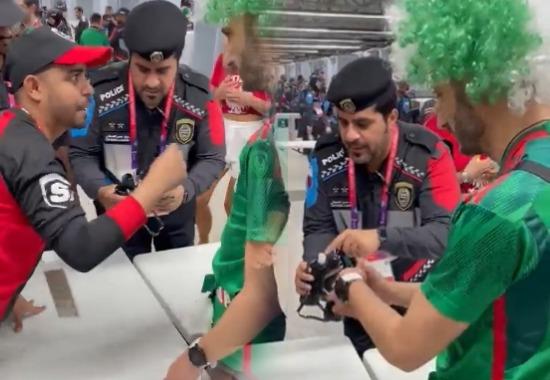 As the FIFA World Cup 2022 is in full swing amidst multiple controversies, a fan was caught by security officers trying to sneak alcohol into Qatar stadium. Alcohol consumption or possession has been banned by Qatar authorities during the FIFA World Cup 2022. While the sale of all beer with alcohol at the eight World Cup stadiums was banned, non-alcoholic beer was still made available at the 64 matches in the country. The alcohol ban announcement received huge criticism from the fans despite of the fact that sponsors Budweiser reportedly paid FIFA around £62 million every four years to be one of its top-level partners. Now, a fan was caught trying to take alcohol inside the football stadium in a binocular.

In the FIFA World Cup alcohol video, security guards can be seen confronting the fan. In the Qatar FIFA WC alcohol video, it can be further seen that a Mexico fan tried sneaking booze into Qatar stadium during the Mexico vs Poland match by hiding it in his binoculars. A security officer can be seen checking the binoculars as the fan argues that they are being used to carry hand sanitisers. He later had his binoculars confiscated by the police while entering the stadium.

After alcohol ban, FIFA authorities have also issued their statement. FIFA president Gianni Infantino said Saturday that World Cup fans can survive for three hours a day without beer after sales were banned around stadiums. "I think personally if for three hours a day you cannot drink a beer, you will survive," he told his opening press conference in Doha. "The same applies in France, Spain, Scotland."

Interestingly, FIFA World Cup 2022 got off the ground on November 20 with some stern rules asking women to dress 'modestly' with sleeves long pants or skirts besides the no-alcohol-selling clause at the stadium. The rage of not allowing alcoholic drinks at the stadium was observed during the tournament’s opening match between Ecuador and host Qatar, where former’s fans were heard chanting "Queremos cerveza, queremos cerveza!" (We want beer).