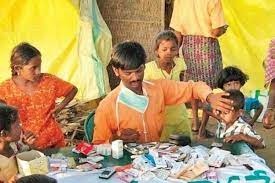 The best way to find yourself is to lose yourself in the service of others as said by Mahatma Gandhi and that fits best to describe the hero of this story. Sunkara Hariprasad Yadav who is a registered medical practitioner (RMP), for many years has been ensuring that no poor should remain untreated. He provides his medical service to the needy and destitute only for Rs 10.

Not only this but while he is at home visits to give injections and medicines, he creates awareness about blood donation, the environment and the drawbacks of believing in superstitions.

Hariprasad is very popular amongst the villagers of Anantapur and Kurnool in Andhra Pradesh.

His key focus is to build awareness around superstition and make the people in the area understand the pitfalls of believing in superstition, profusely followed in the region. As he visits neighbourhoods near Guntakal in Anantapur district, Pattikonda, Maddikera, Tuggali, Papili, Dhone, Banaganapalle, Kodumuru, C Belagal, Nandyal, apart from treating them with medical services, Hariprasad create awareness about blood donation, environmental conservation and scientific thought.

Hariprasad guarantees that whichever area and district he visits, he pitches schools and colleges and creates awareness amongst students on several medical issues that need attention such as organ donation and blood.

Since 1999, Hariprasad has remained engaged in such campaigns. “I was inspired in extending medical services at Rs 10, while making house visits, by Dr Brahma Reddy, founder of Praja Vaidyasala in Kurnool in 1996 after completing my masters in political science,” he said.

Hariorasad's father SV Prasad Yadhav is a theatre personality in Andhra and has performed on stage in several dramas while he acted in a few films under the banner of Bhargava Arts.

Hariprasad describing the love for what he does says that he is grateful that he has an understanding family. His wife and children have always encouraged him, Hariprasad added.

He also conducts competitions in schools for the children to participate in the National Science Day, so that they can understand science more closely. Besides, the RMP motivates children and students to celebrate their birthdays by executing the 'Feed the poor' program blood donation campaign and asks them to promote organ donation.

Hariprasad himself donates blood, and by far donated blood 87 times. He has also received awards from the governor and chief ministers.

Medical camps for NSS groups have been organised by Hariprasad, another great thing he does.

He further said, “Serving and helping people and encouraging others to follow the same path is the true meaning of a good life."