She is approached by the railway police when there is a death on any track between Kengeri (in Bengaluru) and Mandya. Even the local police reach her when there is an unclaimed body.

28 years of Asha V Swamy from Ramanagara has gained the respect of the society for working towards something that most of us would not have the power to do. This woman has been providing dignified farewell to those dead who have been denied the same.

Asha has performed last rites and funerals of more than 3,000 unclaimed and unidentified dead bodies. She is involved in this noble work for over five years, including tracing and transporting beyond 4,000 dead to their relatives.

She is approached by the railway police when there is a death on any track between Kengeri (in Bengaluru) and Mandya. Even the local police reach her when there is an unclaimed body.

Unknown to the conditions during the deaths of those she funeral, Asha has discovered the bodies of the elderly abandoned by family, those who are despondent, and poor. While many accidental deaths that she has seen feels the person could have been the family's breadwinner and may be far away from home. 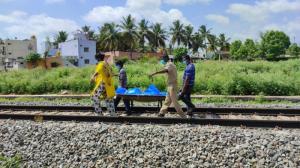 Recalling how the death of a construction worker prompted her team to look for his family for two days without a break after he died, however, it was her team that carried the last rites of the deceased as his family couldn't be traced. Two days later, Asha received a phone call from a distressed family member in Telangana, claiming the body and informed her that the deceased was the only earning member of the family. Asha says such incidents had left scars on her heart.

Asha explains how anxiously she names efforts to contact the family of the unclaimed body she discovers. She, her team and police investigate the area for any identification markers, such as identification cards, cell phones, or photographs. Unable to find anything, they post the information on social media so that a family member would contact them. Otherwise, they intervene and perform the last rites.

Ravi Shetty, president of the Karnataka State Labour Council, once saw a woman carrying a corpse to an ambulance while rushing through a railway station one day.

Intrigued about Asha and her team, he started to chat with them and learned about their job.

Speaking to them, Mr Shetty found out that Asha who worked as a farmer and farm labourer didn't have much money, however, feeds around 200 people daily. She also helps youngsters with school fees and buries abandoned dead bodies.

Asha mentioned that her friends and family pay whatever they can to Jeeva Raksha Charitable Trust so that Asha can aid those in need. Those with low salaries can pay Rs 10 or Rs 20, but Asha adds that every penny matters.

Channapatna DSP Ramesh K after witnessing Asha's dedication to her work facilitated the transfer of an ambulance last year from the Jnana Yogi Lion's Club. People who have noticed her work also came to offer support. Rakesh R Gowda, a team member, and contributor has been supporting Asha in moving bodies and distributing food for the past five years.  Meanwhile, he juggles between three jobs as a food transporter, delivery person, and milk unloader.

Initially, Asha's family was against her commitment to helping the deceased. Her parents, spouse, and her brother-in-law were against her attending dead bodies. Though it took her a long time to persuade her family, they eventually understood and supported her.