FirstStoryPositive: Two friends from Kerala set out on a noble cause of blood donation awareness

The pair had achieved a few defining moments during their journey. 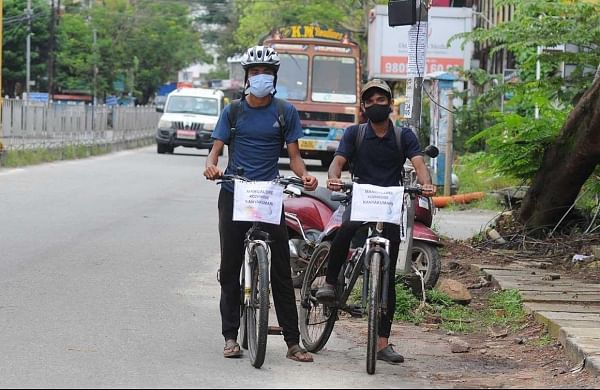 Muhammed Saheer - a native of Kozhikode in 2019 was bedridden and recovering from a bike accident. While he laid on the bed, the boy had several awakening moments when he would think about the purpose of his life.

The 21-year-old, after recovering from the accident injuries, decided to partake in charitable activities, but before he could do something of his heart, the Covid pandemic had shut the lights for many of us.

However, Saheer’s determination didn’t break and he began spending his time as a volunteer at a Covid first-line treatment centre in his neighbourhood. From being invested in the work, Saheer wanted to feel that energy again, so took his cycle out and cycles from Kanyakumari to Mangaluru to spread awareness about blood donation during Covid times. Saheer is accompanied by his friend Fadi Jiyad and they both are on a mission to make people know the importance of donating blood for those in need.

Saheer said: “It is the time I spent recovering from my injuries that became a turning point in my life. Since the pandemic outbreak, people have become reluctant to donate blood. To dispel their concern, I decided to go on a bicycle ride and spread the word to as many people as I can. When I shared the idea with Fadi, he agreed to join in. Our focus is on southern districts that have the least number of donors, so our first leg is between Kozhikode and Kanyakumari.”

Also Read: FirstStoryPositive: Journey of Durvesh Yadav who fought depression, failure to emerge as an inspiration

The pair had achieved a few defining moments during their journey.

People have been welcoming, interacted with them and offered help also, Saheer said. “An army veteran housed us and fed us breakfast too. We mostly travelled through the coastal region and this helped us break many misconceptions about our fisherfolk.”

They started their mission with Rs 300, said the 21-year-old, adding that the support of their friends and people whom they met along the way kept them going.

On August 16, the duo began their journey and rode through the day and would stop about at 7 pm in some safe place. At night, they would stay at bus stops and bus stands, ensuring a low budget ride.

It’s been a learning curve for us. Our remaining phase from Kozhikode to Mangaluru will also be done without much delay,” Saheer said.

Cycling was a passion for Fadi, so Saheer’s idea was an unmissable offer. “Apart from riding through southern Kerala for the first time, it’s immensely satisfying that our effort has inspired many to donate blood,” Fadi Jiyad added.

Saheer wants to continue with his studies along with community work.

“I have been working as a volunteer in a CFLTC for more than a year. I have been visiting homes to distribute medicines and essentials. Once our ride is over, we will go back to these activities again,” said Saheer.

Both boys are awaiting the results of the final examinations of UG and will pursue their higher education.