Former Punjab DGP calls out Capt. Amarinder for his "anti-national" remarks on Sidhu

In a tweet, Mustafa alleged that Captain Amarinder Singh has slept with an ISI agent for years and asked him to not lecture on nationalism. 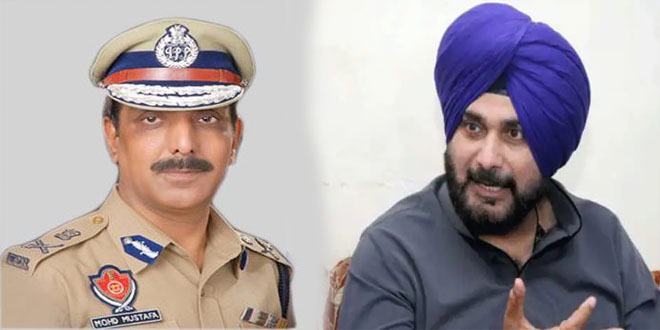 Mustafa, who is a trusted advisor to Sidhu and husband of Razia Sultana - a cabinet minister in Amarinder's council of ministers, tweeted a series of shocking comments on Captain on questioning Navjot's patriotism and nationalism on Sunday morning. This would be the first time that someone has used such language against the captain publicly.

In a tweet, Mustafa alleged that Captain Amarinder Singh has slept with an ISI agent for years and asked him to not lecture on nationalism.

After resigning as Punjab's chief minister on Saturday evening, Amarinder Singh had accused Sidhu of an anti-national, dangerous, unstable and incompetent, saying he will be a threat to Punjab and the country is chosen as the state chief minister.

"Capt Sir, we have been family friends for long. Don’t force me to open my mouth. I know you have an infinite capacity to tell barefaced lies with a straight face. Attack NSS (Sidhu) day in and day out politically, by all means, but to question his patriotism/ nationalism doesn’t lie in your mouth”, he tweeted.

He further wrote" having yourself lived in and slept with a known ISI agent for 14 years, not to mention her indiscretions of gross indifference in government working and tons of money siphoned off in overseas accounts with your full connivance, you have no business to issue patriotism slips."

Referring to Sidhu's close ties with Pakistan PM Imran Khan and General Bajwa, Amarinder Singh said he will be a national security threat and he will not accept him as the chief minister of the border state.

Mustafa in another tweet, wrote, “what you know that I know, is not even tip of the iceberg. I have in my possession a mountain of wrongdoings with irrefutable proofs”.

“What you don’t know is that to honour my word to you not to go public with what I have against you even after you embargoed me most unethically through UPSC in connivance with Arora, I bluntly refused to share that even with Rahul Gandhi (RG) when asked for. That’s the strength of my character, Sir Jee,” he said.

Mohamad a staunch loyalist to Captain was expecting to be considered to be appointed a the DGP when he would be elected a the Chief minister, however, things took a turn with Suresh Arora granted being the DGP and later Dinkar Gupta taking charge, ignoring Mustafa’s seniority.

Mustafa and another IPS officer, Siddharth Chattopadhyay had challenged the Amarinder government's decision in 2019 on the appointment of Dinkar Gupta as the state DGP. Though the appointment was cancelled by the Central Administrative Tribunal (CAT), the Haryana Punjab and Haryana High Court had stayed the CAT status in January 2020. In February the same year, the Supreme Court dismissed Mustafa’s appeal against the HC stay order.