FUNNY Video: Anupamaa's Rupali Ganguly Is In Pain And The Reason Will Blow Your Mind

Anupamaa, the lead actress of the daily soap, is known for her outgoing personality, and she is frequently seen filming videos of herself or with the actors of the programme. 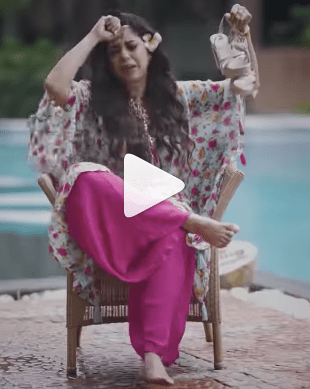 Rupali Ganguly is one of the most prominent actors on social media and she enjoys a large fan base. She frequently posts photos and videos of herself with amusing captions for her fans. She's posted a funny video on social media in which she expresses her problems with cute facial expressions.
Also Read: ‘Anupamaa’ buys an off-road beast; onscreen sanskari bahu is a badass in real life
Anupamaa, the lead actress of the daily soap, is known for her outgoing personality, and she is frequently seen filming videos of herself or with the actors of the programme on Instagram. She is now on vacation with her family and has released a funny video in which she expresses her displeasure with wearing heels. She is pressing her foot, which is hurting from wearing heels for so long. In her flowery kaftan kurti and pink palazzo trousers, she looks stunning. As she relaxes by the pool, she also has a flower tucked behind her ear. She shared in the caption, “Inn dono ne milkar, jaan meri le ..something every girl can surely relate to”. See video here.
Also Read: ‘#UninstallHotstar’ trends as it rejects grievance complaints against web-series ‘The Empire’ 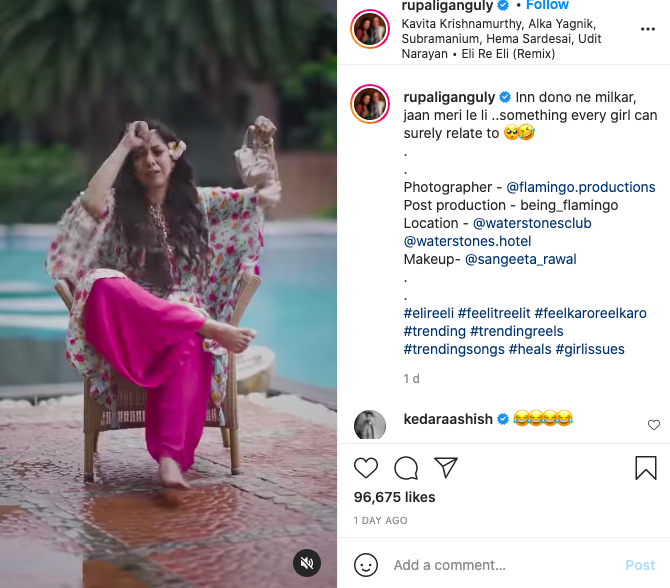 Rupali Ganguly has been posting photographs from her vacation on social media. She had previously uploaded a photo of herself and her kid from inside the pool, wishing him a happy birthday. “Happy Birthday my SonShine,Thank u for choosing me to be ur mother THU THU THU”. Birthday greetings for her son Jojo came from Jaswir Kaur, Ronit Bose Roy, and Rajan Shahi.
Also Read: Amitabh Bachchan's bodyguard earning Rs 1.5 Cr per year, transferred after reports go viral 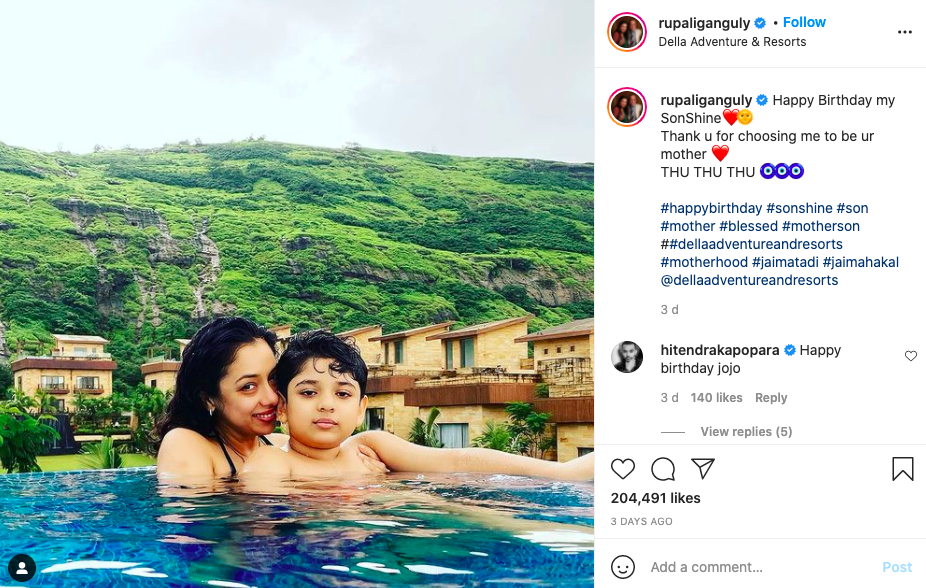 The video garnered over 60 thousand likes in only a few hours after it was posted.

Meanwhile, the public adores Rupali's role in Anupamaa, which is one of the reasons she has exploded in popularity on social media. Her Instagram account has surpassed one million followers. Last month, after reaching the million-follower mark on Instagram, the actress acknowledged her followers with a photo.

Her TV programme Anupamaa has been at the top of the TRP ratings for quite some time. Rupali is in the lead role of Anupamaa, the title of the programme. Rupali is portraying a lady who has made and continues to make several sacrifices in order to provide for her family.