Glimpse from the Cruise party ‘Namascray’ goes viral, claims to be pre-raid video

NCB official sources said that the star kid cried throughout the interview and even admitted to using narcotics for four years. 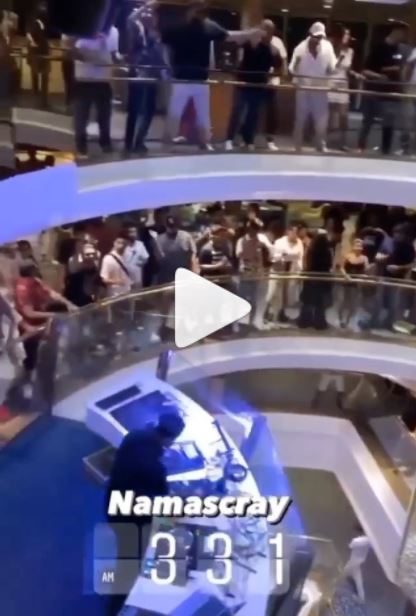 Aryan Khan, son of Bollywood actor Shah Rukh Khan, is currently in the custody of the Narcotics Control Bureau (NCB). Eight people, including Aryan Khan, were detained by the NCB on Saturday after the bureau raided a cruise heading towards Goa from Mumbai.

On Monday, a video of the cruise has surfaced on the internet. In the video, people are enjoying, dancing and having alcohol carelessly. It is out that the video was shot before the NCB team raided the cruise.

A video of the same was shared by a Bollywood news Instagram page. While sharing the video, the page wrote the caption, which read, “Here’s a glimpse from the Cruise party ‘Namascray’ for youngsters was organized by a Delhi event agency and hundreds of people attended it. 8 including Aryan Khan were detained.”

Have a look at the video here:

However, there is no official confirmation, about the video, by the NCB.

According to NCB sources, Aryan Khan used to use narcotics even while he was in the UK, Dubai, and other places.

“Various narcotics were discovered from the suspects during the investigation, which they had hidden in their clothes, undergarments, and handbags (by women),” the NCB officer added.

Aryan Khan, has been in NCB custody, where Aryan tried to clarify his presence on the cruise. He had said that he was invited as a VIP guest. Currently, he has appeared in court for bail. According to reports, nothing was discovered on Aryan when he was arrested, so he was merely charged with consumption.