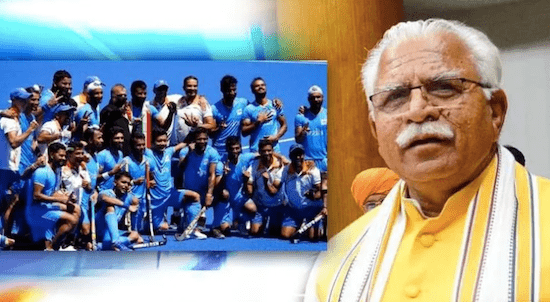 Chief Minister Manohar Lal Khattar promised the two players from Haryana who are members of the Indian Men's Hockey Team cash prizes of 2.5 crores each and positions in the state's sports department after their gallant win over Germany in the duel for the Tokyo Olympics 2020 Bronze Medal.

CM Manohar Lal further stated that the players may be eligible for Haryana Shahari Vikas Pradhikaran (HSVP) plots at a lower rate. Surender Kumar, a defender, and Sumit, a midfielder, are both from Kurukshetra and Sonipat, respectively, and have been key members of the team in the Tokyo Olympics 2020.

In a closely fought match, the eight-time gold medalists overcame Germany 5-4. The Indian Men were off to a bad start when Timur Oruz of Germany scored early in the game to put Germany ahead. India's first goal was scored by Simranjeet Singh, followed by successful efforts by Hardik and Harmanpreet later in the game.

Manpreet Singh, the current Indian captain, was a member of the squad that competed in the 2012 London Olympics and lost all five of its matches. After a 41-year drought, he led from the front and led his side to an Olympic medal nine years later. As India won the bronze medal, congratulatory comments and phone calls began to pour in from around the country on social media.

Prime Minister Narendra Modi was one of the first to congratulate the squad on their victory.  “Many many congratulations on the win. You guys have done magic and made the entire nation proud. The whole India is proud of what you have done. Your hard work since so many months has finally paid off.”

PM said while talking to Coach Graham Reid and Captain Manpreet Singh in a video, “Please wish the entire team from my side for their hard work. The nation feels proud of you and you have done a great job”.

President Ram Nath Kovind also congratulated the men’s hockey team and tweeted, “Congratulations to our men's hockey team for winning an Olympic Medal in hockey after 41 years. The team showed exceptional skills, resilience & determination to win. This historic victory will start a new era in hockey and will inspire the youth to take up and excel in the sport.”

Well, the whole nation is proud of its boys.