Ind vs Eng Match Controversies: Find out 4 HEATED exchanges that occurred in match ended up in favour of India

Let’s have a look at those 4 big controversies that happened during India vs England series 1st Test Match: 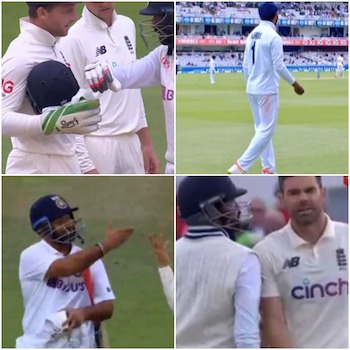 Once again India did it. Another international Test, and India's bottom order continues to shine. Jasprit Bumrah's day started as a batter in a hostile environment, but by the end of the day, he and Mohammed Shami had turned the pressure on England so quickly and clinically that the hosts, who had been in control of the game going into the final day, folded in the final hour, giving India a 1-0 series lead. Anushka Sharma also shares team India's Winning moments.

When India and England have played cricket against one other, they have always been neck and neck. When the two giants have faced off, there has been no shortage of entertainment, but there have also been some of the ugliest scandals of the India-England Test series.
This time also we are ended up with 4 biggest controversies that happened in the first test match of India vs England.
Also Read: Anushka Sharma Shares Hubby Virat Kohli's Led Indian Team’s Winning Moments As They Beat England by 151 runs
Let’s have a look at those 4 big controversies that happened during India vs England series 1st Test Match:
When unruly crowd at Lord’s throws Champagne corks at KL Rahul
The shameful incident at the Mecca of Cricket happened when the Lord’s England fans were seen throwing beer and champagne corks at KL Rahul while he was fielding near the boundary. Pictures showed several at the boundary line where KL Rahul was fielding and Rahul. During the 68th over broadcasters showed an irate KL Rahul throw it back at the stands from where the corks came from on India captain Virat Kohli’s direction. The commentators were also heard talking about the incident. 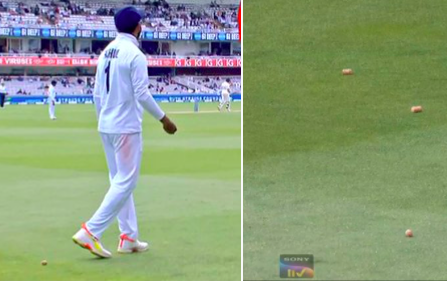 The incident occurred when England skipper Joe Root and Jonny Bairstow were batting in the middle. After the fourth ball of the over from Mohammed Shami, English fans from the stands threw champagne corks at Rahul, who was fielding near the boundary ropes.
A visibly irate Indian captain, Virat Kohli, gestured at KL Rahul to throw it out of the ground. See video here. 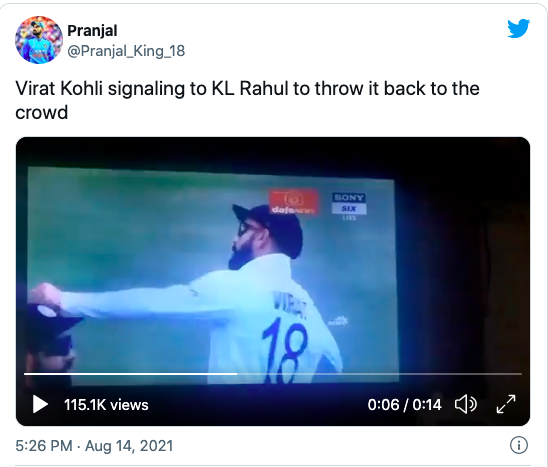 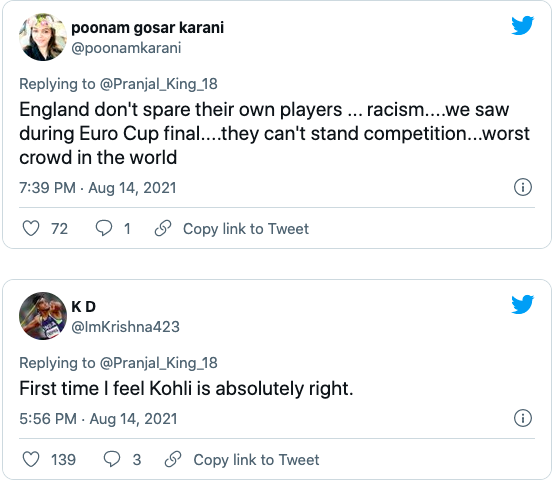 Bumrah vs Jos Buttler in Lords
Bumrah, who came in to bat at No. 10 in the 90th over, batted cautiously to gather runs without taking too many risks. After the conclusion of the 92nd over, Bumrah and England wicket-keeper batsman Jos Buttler got into a furious argument. See video here.

On-field umpire Richard Illingworth, who also spoke with England captain Joe Root, intervened between Bumrah and Buttler.
Also Read: Ind vs Eng Day 4: Things get heated up between Rishabh Pant and Joe Root. See how Twitterati’s react
Bumrah greeted England fast bowler Mark Wood by cutting him for a boundary on the first delivery of the following over after tense moments in the middle. Virat Kohli, who was watching the play from the Lord's balcony, was spotted exulting at the manner Bumrah was batting. 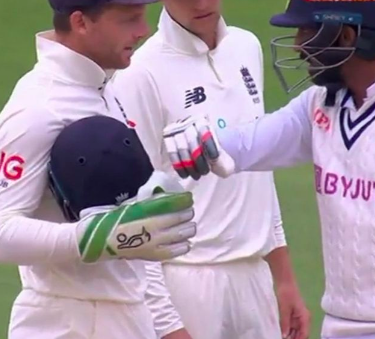 Wood delivered a hard bouncer in the same over, which smacked Bumrah in the grille of his helmet. Following that, the right-handed batter was subjected to a concussion test. 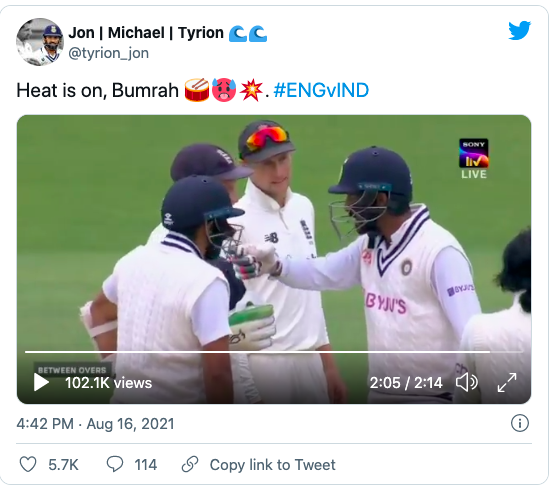 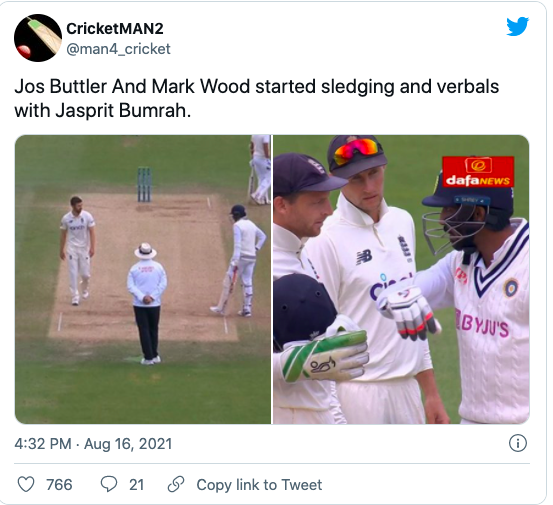 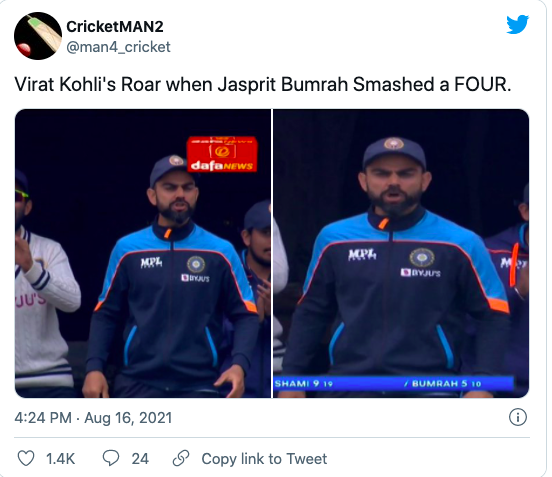 Mohammed Siraj vs James Anderson in Lord’s
On Day 3 of the India versus England first Test match at Trent Bridge in Nottingham on Friday, India pacer Mohammed Siraj and England great James Anderson exchanged a few words. A frantic Joe Root tossed the ball to his premier seamer Anderson in the second session, aiming to break the tedious last-wicket partnership between Siraj and Bumrah. 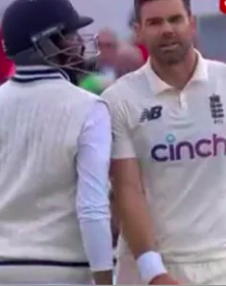 Anderson proceeded to mumble a few words at Siraj, who had swung and missed the last delivery, after finishing the 84th over - his first with the second new ball. The Indian seamer, on the other hand, was not one to back down. He turned back and responded. See video here. 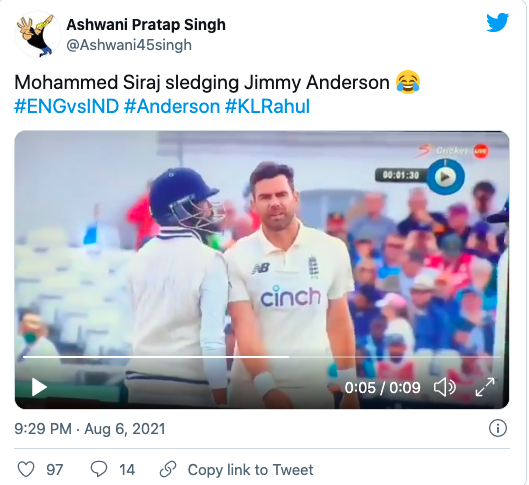 As Anderson walked away and Siraj swapped ends for the following over, the situation did not escalate any further.
Images and videos of Siraj and Anderson's brief spat were widely circulated on social media.


Rishabh Pant vs Joe Root When Bad light ended play on Day 4 early
Pant's task was lightened a little on Day 4 because to the poor lighting. England were on a roll, having claimed three fast wickets in the last session of the day's play. Pant was joined in the middle by Ishant Sharma after the visitors lost six wickets.
Poor lighting derailed their preparations. The vision issue was brought up by Indian players due to clouds concealing the London sky. The umpires then put an early end to the day's activities, and some of the session was missed as a result. England captain Joe Root appeared displeased with the decision as he looked disgruntled while walking off the field. 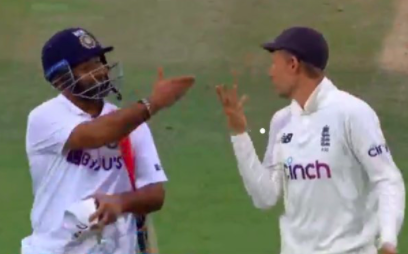 On his way back, the experienced player struck into a conversation with Pant, and the two appeared to be arguing something. The topic of discussion looked to be terrible light from the outset. Because of the visibility issue, the English skipper was using spins from both ends. Pant also kept his point in front of the English captain, which sparked a Twitter meme frenzy. 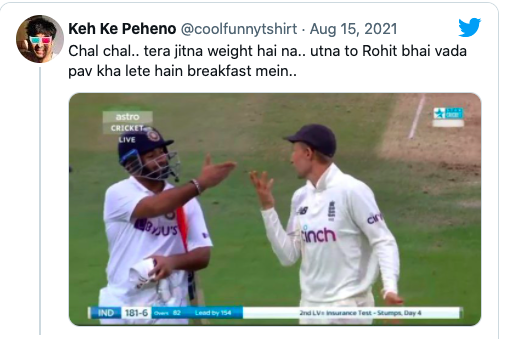 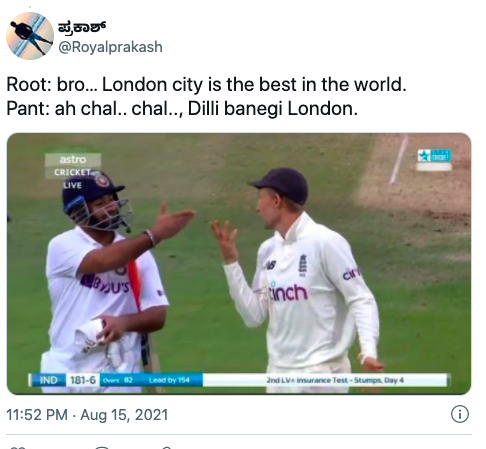 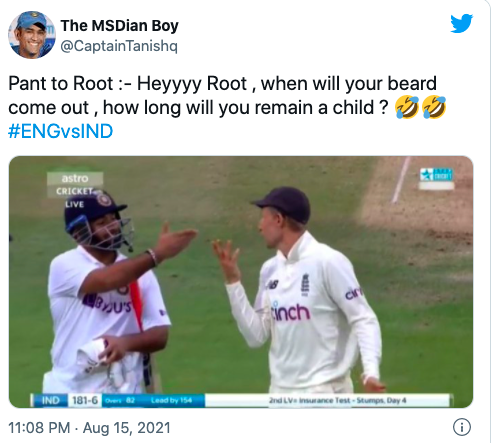 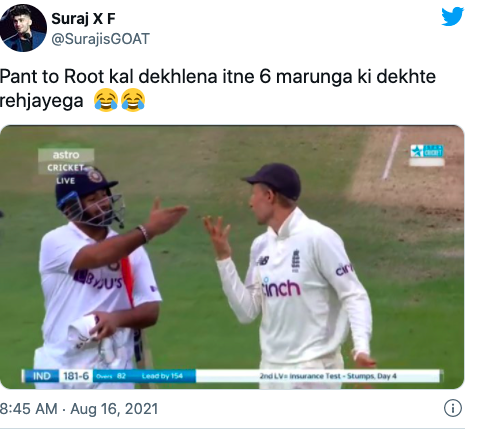