Kartik said, "This demonstrates how valuable a memory it is for all of us, and it was incredible to relive and share it via the process of this collaboration" 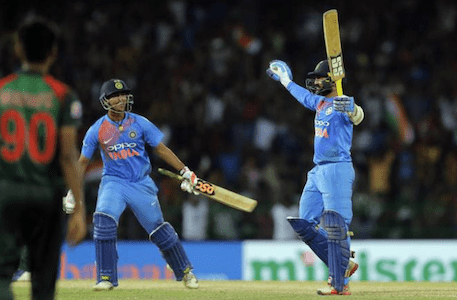 Dinesh Karthik's last-ball six in the 2018 India-Bangladesh match, which earned India the Nidahas Trophy that year, is one of the most famous moments in modern sports history. Through a partnership with squash player Saurav Ghosal, this spectacular event has been immortalised in the form of India's first ever sports NFT (non-fungible token). The digital art NFT, titled "Six For The Win," will go up for public auction in October and is an animated short that depicts Karthik's own thoughts as he faced down the other side in the game's dying minutes.

"That wonderful experience for the India squad, and for every one of our supporters, happens to be Youtube's most-watched sports video in the world," Karthik says of the NFT's creative concept.
Also Read: ‘Dad-Son Moments’: Hardik Pandya’s PICS with Agastya prove he is a doting father
This demonstrates how valuable a memory it is for all of us, and it was incredible to relive and share it via the process of this collaboration." Ghosal and Karthik worked with New York-based tech partners to create the digital art, which includes Karthik's voiceover.
"We believe that 'Six For The Win' would usher in an age of sporting NFTs," Ghosal said of what this implies for India's growing NFT sector. It's really exciting for us to be pioneers in the Indian NFT area, which has already had tremendous success in the United States. We are excited to establish its presence in the United Arab Emirates. Non-refundable tokens, like cryptocurrency are kept on a block-chain, which means they can't be traded or broken down, and they have an exact history from origin onwards, making them impossible to counterfeit. Digital art and other types of memorabilia have a lot of potential here.”
"Between the memorable triumph that this NFT celebrates and the distinction it enjoys as India's very first sports NFT, this is a collector's dream," Ghosal said of 'Six For The Win.' We may also anticipate its value to rise over time, making it a great investment, and we believe that growth will be determined on the first day of the auction.
We're thrilled to be able to make it available to bidders in the UAE who are interested in learning more about this fast-growing sector."

The public auction will be held between October 12th and 22nd on the internet and will be available to the public. The successful bidder at the auction will also receive Karthik's autographed jersey from the Nidahas T20 tournament.