Is India on its way to becoming the rape capital of the world? 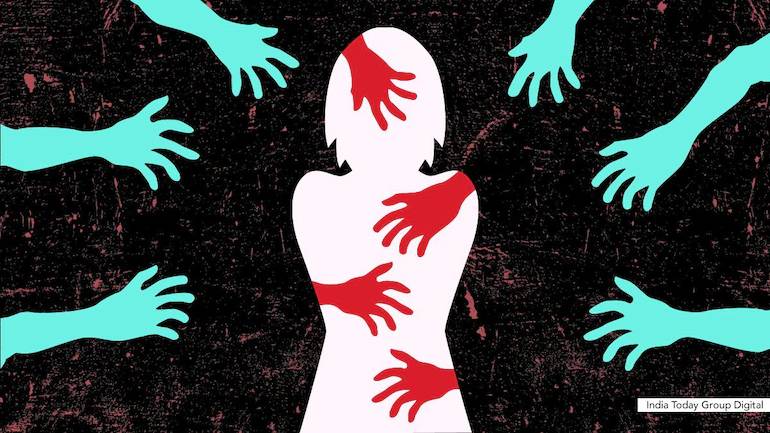 Indians are not foreign to crimes committed against women. Rapes, brutal murder, sexual assault and molestation form a daily dose of news headlines. Ranked amongst the dangerous places to live, in India, a rape crime is reported every 15 minutes with a brutality that would shrink your head down in shame. Crimes against women weren't news until the 2012 Nirbhaya case that not only disgraced India internationally but brought its citizens on the roads protesting and asking the judiciary for the strictest implementation of laws.

The massive uproar led to intensive media, then, formation of fast track courts, stringent legislatures were also created providing several laws favouring women.
However, rapes crimes have not stopped, we hear women being assaulted and raped in the most gruesome gut-wrenching manner, in fact, she's not even safe at her own house.

Recently, a 15-year-old old girl was raped for months by 33 men, we cannot imagine the horrific trauma the victim would be going through. Another case where a 21-year-old, Rabiya Saifi (changed name) - a Civil Defence officer was found murdered in Faridabad on 26 August. She was allegedly kidnapped, raped and stabbed to death by her lover, who claimed to be her husband. However, the family and their lawyer allege the incident has more to it and accuse the police of conspiracy. A woman who was a part of the police force had been brutally killed. If such women who are physically trained to fight back are not safe in this country, what is the hope for normal women?

Social activists, netizens on social media and several others have lashed out at the Delhi police and national media for their silence on the case and suspect there's more to the case.

Also Read: Justice for Sabiya: The incident that shook the nation

The mainstream media has adopted an eerie silence on this incident. None of their pages or website had devoted even a small column for it. Neither are the leaders who vouch to safeguard the daughters of India, are seen raising their voice for the victim. But why? Is it because she is not a Hindu or is it because the accused himself is a Muslim or the Delhi police itself is involved in the case? Religion-based reporting - what a shame for the sufferer. Every rape victim's story should be heard and given its due justice.

Meanwhile, a Mumbai woman in her 30s was reported to be raped and a rod was inserted in her private parts, leading to her death. Despite the ghastly incident, Shiv Sena spokesperson feels Mumbai be a safe haven for women. In another case, a 14-year-old was abducted from Pune railway station, gang-raped by 8 men multiple times at different places. She has suffered severe mental trauma and is being treated and counselled. A 32 year Kerala woman travelled 300 km to meet her 'online friend', Ajnaz in Kozhikode, who befriended and lured her to come to his place. After she reached, Ajnaz raped and invited three of his friends, drugged and gang-raped her and was video graphed. Four of them have been arrested.

Scores of such terrifying cases - grab embittered protests, candle marches, few tweets and coverage by the media. Victims and their families are provided with some compensation and people are left with empty assurances.

But how long would affirmations work? Even rigid laws, fast trials and safety measures haven't helped yet?

India has a history of violence against women, deeply rooted in our society that has been accepted by women themselves. Daughters are perceived as burdens because parents have to pay hefty dowry leading to them neglecting the overall well-being of the girls in the house, while boys are given everything possible. Here lies the biggest issue.

A good percentage of women and girls believe that it must be their fault if their husbands assault them. This extends to such a point that even marital rape isn't considered a crime and taken as a husbands' right over his wife's body cause they are married. Thus, domestic violence is widely accepted by the people of India.

Lack of female officers in the Indian police force and in general, not enough police in the country has significantly threatened the safety of women in public places.
India's sluggish legal system is painfully slow, contributed by a shortage of judges; with several loopholes allowing the criminal to use that for escaping justice.

Rapes aren't just a system based issue in India, but it's something associated with a regressive mindset, patriarchal attitude and a general widespread perception of women has made the culture of violence against women common.

Men deemed superior gender have been given the benefit of the doubt in connection to brutal crimes they commit. Rising sexual harassment against women has been always been blamed on provocative clothing. Many see western clothes as an invitation to rapes, while women who drink, smoke, go to the pub, return home late at night after work, have a fun time with their male friends are widely seen as morally loose characters.

Cellphones, going to the bazaar are also amongst the elemental reasons why women get raped. Recalling once West Bengal CM Mamata Banerjee said that young girls must be prohibited from using mobiles as they get lured by boys and they are assaulted. Not only this but women who are "painted and dented" also get raped because of the heavy makeup and loud lipstick.

Asking victims to compromise with their attackers, stigmatising and blaming them make it more difficult for the victim to survive.

Male politicians making statements where they question the morality of the victim, vilify the rape victims supporters are added problems, it justifies the rapist's actions, giving more courage to the crooked state of mind.

In the past, the Samajwadi Party founder addressing a huge crowd said 'ladke hai, galati hojati hai,' and promised to bring anti-rape laws.

There are several such insensitive comments given by not only male politicians but women at higher levels shaming the victims for going out late at night or meeting a male friend.

The endless freedom and leverage bestowed upon men allow them to act apathetic towards women. We see enough examples in our neighbourhood, a boy grows up seeing his father physically assault, abuse, treat his mother and sister indifferently, he accepts such behaviour and repeats it. Therefore, the concept of not respecting women is experienced at home, unconsciously.

Coming to the lack of female police officers at the station and especially during night patrolling and repeatedly asking vulgar questions is another reason why women feel unsafe and hesitate to register a complaint against a crime. We, hence, need better-trained police officers, sensitized towards the mental trauma of the crime and how their indecent attitude during the trials impact them.

We need enough dedicated police for the protection of ordinary citizens, rather than giving protection services to politicians, senior bureaucrats, other elites and VIPs.

When it comes to courts and trials, we require a speedy procedure that doesn't break the strength and faith of people in the judiciary and one that doesn't sanction time to the rapists and assaulters to get away from the rightful verdict.

Groping, verbal harassment, passing lewd comments, eve-teasing, stalking - all happen in broad daylight in public areas. The bystanders instead of just watching a woman being harassed can awaken their self-consciousness and anger; intervene and teach such miscreants a lesson.

Many times, the victim's family is pressured by police to either drop the case or marry the rapists, to keep the peace between the clan and the families. The thought that marrying the victims to her attacker would ease the suffering is ethically wrong and must be considered an offence.

In rural areas, easier access to well lit public toilets will help avoid an assault on women to a large extent as they have to visit open fields in the dark to relieve themselves.

Making men from childhood understand that clothes have nothing to do with a woman's morality and if someone wears short clothes or consumes alcohol,  it does not entitle a man to force himself on a woman.

Ending gender discrimination and violence is hard but it's high time that stricter measures are brought in the form of laws.

The first transformation should begin from home, parents teaching sons and daughters on respecting the opposite genders, speaking to them about what's going on in their minds, checking on them. Schools and educational institutes must have sessions discussing self-awareness.

Though a change in the thought process is a tough lane, however, smaller steps must be immediately necessitated to at least bring the offender to justice.