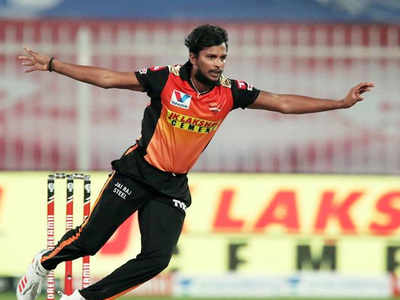 The Sunrisers' first two games were against the Kolkata Knight Riders and the Royal Challengers Bangalore, respectively. The Sunrisers substituted him with Khaleel Ahmed, another left-arm pacer, once he was out. T Natarajan rose to prominence in the UAE during the IPL 2020, where his yorkers and death-bowling prowess stood out. The Sunrisers, who had lost Bhuvneshwar Kumar to injury, benefited greatly from his rise. The Sunrisers, who have yet to name a replacement for Natarajan, have only won one of their five games so far and are currently ranked last in the points table.

"Today, I underwent knee surgery- and am grateful for the expertise, attention, and kindness of the medical team, surgeons, doctors, nurses, and staff. I’m grateful to BCCI and to all that have wished well for me," Natarajan wrote.

Natarajan, 30, had only appeared in two games for Sunrisers Hyderabad this season. He never completely recovered from his knee injury, according to reports, due to the heavy workload he faced on the Australian tour.  He had gone to the National Cricket Academy for rehabilitation after his tour of Australia. Despite not being 100 percent match-ready, he is believed to have been deemed fit to play in the limited-overs series against England. With his yorkers at the death during the last IPL, Natarajan became an instant sensation, and he went on to play all three formats for India in Australia.


Meanwhile, IPL COO Hemang Amin has reassured all players and support staff that they will be completely secure within the bubble, and BCCI chief Sourav Ganguly has confirmed that the T20 league will continue despite an increase in COVID-19 cases in India.