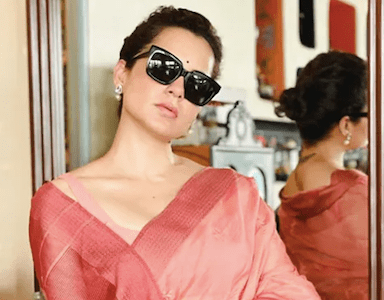 According to reports, Kangana Ranaut has been called by the Delhi assembly's panel on peace and harmony for her anti-Sikh statements. Ms Ranaut has been summoned to appear on December 6 before a committee chaired by Aam Aadmi Party leader Raghav Chadha.

According to reports, Ms Ranaut has been called for her "obnoxious and derogatory remarks on Sikhs."
Also Read: North Korean Man Sentenced To Death For Smuggling Copies Of Squid Game
Sikhs have filed a first information report, or FIR, against the actor in Mumbai, alleging that he used derogatory words against them on social media.
Ms Ranaut "clearly and deliberately" depicted the year-long protest by farmers against three new agricultural laws as a "Khalistani" campaign, according to a police complaint filed by a Mumbai businessman, Delhi Sikh Gurdwara Management Committee representatives, and the Shiromani Akali Dal.

"Khalistani terrorists may be arm twisting the government today... But let's not forget one woman... The only woman prime minister ne inn ko apni jooti ke neeche crush kiya tha (the only woman PM who crushed them under her shoes). No matter how much suffering she caused to this nation... she crushed them like mosquitoes at the cost of her own life... Lekin desh k tukde nahi hone diye (but she did not let the nation get divided)," Ms Ranaut had posted on Instagram.


Her remark was seen as a reference to former Prime Minister Indira Gandhi, who was killed in October 1984 by her Sikh bodyguards. Following the riots, about 3,000 people were killed, with armed men targeting Sikhs across Delhi, destroying and vandalising houses, shops, and gurdwaras.
The actor has been a vocal opponent of farmers' protests, particularly in Haryana and Punjab, against three farm regulations that the federal government has recently agreed to repeal.