‘Khela Hobe’ until BJP is dethroned from Centre: Mamata Banerjee

Mamata said- BJP does not trust its own ministers and does spying. 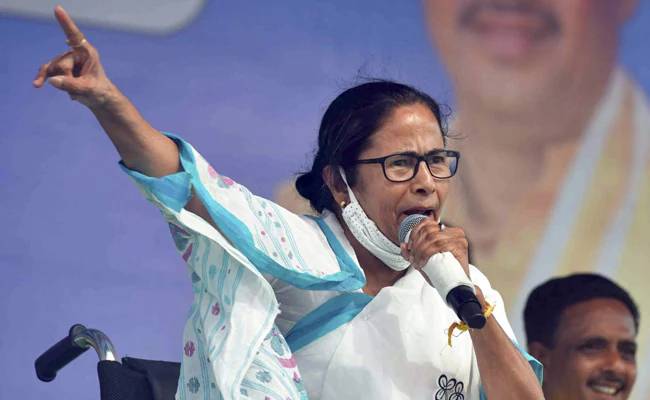 West Bengal Chief Minister Mamata Banerjee on Wednesday held a mega virtual rally in several states including Uttar Pradesh, Delhi, Gujarat, Tamil Nadu and Assam. Marking Martyr's day, Mamata made it loud and clear that her next target is the national capital. She added that she will start 'Khela Divas' from August 16 and distribute football to poor children.

Mamata said- BJP does not trust its own ministers and does spying on them.

Addressing the virtual rally, Mamata said, "Today our freedom is in danger. The BJP has put our freedom in danger. She does not trust her own ministers and misuses national agencies. Our phones are being tapped. Pegasus is dangerous and cruel."

She further continued, "I can't talk freely to anyone. These people are spending a large amount on espionage. I have plastered my phone. We should put a plaster on the center too," she added.

A new slogan was released two days ago. Posters of Mamata and her nephew Abhishek are strewn all over Kolkata, showing their power in Bengal.

To launch a massive campaign against the Modi led BJP government, Mamata has decided to conduct virtual rallies across several states in the country, including UP, Delhi, Gujarat, Assam, Tamil Nadu and Tripura. Along with live streaming of the rally, arrangements are also being made to translate Banerjee's speech into local languages.

'Mamata government in Delhi in 2024- Trinamool'

Party leader Madan Mitra said that TMC is going to enter into national politics on July 21 through these virtual programs. For this, large screens will be installed in Tripura, Assam, Odisha, Bihar, Punjab, UP and Delhi.

In 2024, Delhi will have Mamata's government, he added, citing that UP is the biggest factor in the 2024 general election. He also said that BJP will lose the UP assembly polls in 2022.

On July 21, 1993, 13 activists were killed in police firing during the Youth Congress demonstration in Kolkata which was led by Mamata Banerjee. The day was declared Martyr's Day and since then Trinamool celebrates the day every year on July 21.

Every year to mark the day on July 21, Trinamool Congress organises big rallies. Last year, Mamata had addressed the party workers from her office.

After Bengals win, Mamata eyes on other states

Soon after, Abhishek Banerjee was made the general secretary of the Trinamool party, he said that TMC will now contest polls not only in Bengal but in other states as well.

Earlier, TMC had contested elections in Kerala and Gujarat, but could not make an impact on the people.

In Northeast states like Manipur, Arunachal Pradesh and Tripura the party had influence, but could not maintain it. A Trinamool leader said that now the mood of the country is different.

Mamta's dream to rule the Center is not new

Mamata Banerjee's dream to acquire the Centre is nothing new. When in 2012, Mamata opposed Pranab Mukerjee’s nomination for President by the UPA and named APJ Abdul Kalam, it was clear that central politics was on her mind.

In 2014, Mamta's party won 40 Lok Sabha seats, yet she was not inducted in the centre as the BJP led by Modi got the biggest majority in the polls.

The situation remained the same in 2019 as well. However, Mamata returned with a bigger majority in the 2021 elections.

In 2019, Mamata Banerjee brought almost all opposition parties under one platform when she held a rally at the Bridge Parade Ground in Kolkata. However, neither Congress nor the BJP considers the Trinamool, which has been a part of both the NDA and UPA governments, as a reliable partner.

Mamta’s hate for the NDA government and Modi is known to the entire country and she won't leave a stone unturned in the next elections.