IPL 2021 MI vs CSK: ’We have 6 more games to go’- Kieron Pollard still upbeat despite losing to Chennai

IPL 2021: Mumbai Indians skipper Kieron Pollard blamed their 20-run loss to Chennai Super Kings in Dubai on Sunday on costly death-over bowling. After losing their fourth match of the season, MI will need a strong finish to qualify for the play-offs. 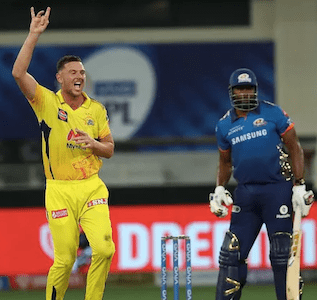 Despite losing the first game of the UAE leg of the Indian Premier League (IPL) 2021 against Chennai Super Kings in Dubai, Mumbai Indians stand-in skipper Kieron Pollard remained upbeat. After losing their fourth match of the season, the Mumbai Indians are in risk of falling out of the top four in the points table.

Even after a 20-run loss against Chennai Super Kings, Mumbai Indians are still in fourth place on the IPL 2021 points table. To qualify for the 14th season's play-offs, they must win at least four of their remaining six games.
Also Read: IPL 2021: After Virat Kohli’s Emotional RCB Announcement, See How World Reacted

The Mumbai Indians fell woefully short of a 157-run goal, despite Saurabh Tiwary's eighth IPL fifty. But that wasn't enough as Deepak Chahar (2/19) and Dwayne Bravo (3/27) ripped through the Mumbai Indians batting order, which was without both Rohit Sharma and Hardik Pandya, who were both resting for the season's resumption.
Also Read: IPL 2021: Know at which place your favourite team stands, how can they qualify for playoffs
Kieron Pollard threatened to repeat his performance against CSK in New Delhi a few months ago, but Josh Hazlewood took the crucial wicket.
"We needed one player who could go for deep bat. There were a few gentle dismissals. We can't allow it happen at this level," Pollard said, "but we still have six games to go."
Mumbai Indians surrendered a little too much in the last overs, according to Pollard, as CSK scored 69 runs in the final five overs. CSK were reduced to 24 for 4 at the end of the powerplay, but Ruturaj Gaikwad produced a masterful innings (88 not out) to help them reach 156 in the 20-over limit.
"We must have formed a partnership." In hindsight, you can do a lot of things differently. I believe that is the difference between winning by 20 runs and losing by 20 runs. At the end, I gave too many with the ball. Their batters attempted to maintain the momentum throughout the game, but we were unable to do so.