Virat Kohli lost his cool during his final match as captain of the Royal Challengers Bangalore after umpire Virender Sharma declared Rahul Tripathi not out due to a leg before call. 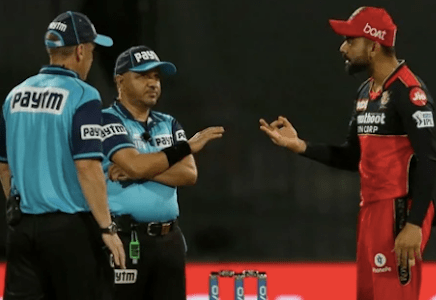 Virat Kohli lost his cool during his final match as captain of the Royal Challengers Bangalore after umpire Virender Sharma declared Rahul Tripathi not out due to a leg before call. Yuzvendra Chahal struck KKR Rahul Tripathi on the pads in the seventh over of the innings, prompting a loud outcry, but umpire Sharma, who had a pretty average match, did not flinch.
Also Read: India's NFT sports features Dinesh Karthik’s iconic 2018 NIDAHAS TROPHY last ball six

Kohli accepted the review after speaking with Chahal and wicketkeeper batsman Srikar Bharat, while the entire RCB team looked shocked.
The DRS indicated that the ball would strike the stumps. Tripathi had to leave since there were three reds.
Also Read: IPL 2021: Kolkata beat Bangalore by four wickets, move into Qualifier 2
It didn't end there, though. RCB had won the review, but Kohli approached Sharma and disagreed with him over the decision. In frustration, he tossed the ball onto the pitch and exchanged angry words with Sharma. From square leg, Chris Gaffney interfered and told Kohli to get on with the game. Kohli smiled at the end of the conversation, but not before he got into a heated argument with umpire Sharma.


Sharma had made his third wrong call in the match. Earlier in the game, he had dismissed RCB's Shahbaz Ahmed and Harshal Patel, but both judgments were reversed thanks to DRS. Sunil Gavaskar, a former India captain, defended Sharma on air, saying the umpire should not be required to justify his judgement to anyone.


"He is not required to provide an explanation. He has made a decision, and whether it is correct or not, it is his decision "Gavaskar said.
Kohli was knocked out of the IPL 2021 in his final match as RCB captain, losing by six wickets against KKR. Kohli's 10-year stint as captain of the RCB came to an end with this. Kohli scored 39 in both his first and last match as RCB captain.