The veteran actress had been brought to the hospital and was recovering when she died, according to sources. 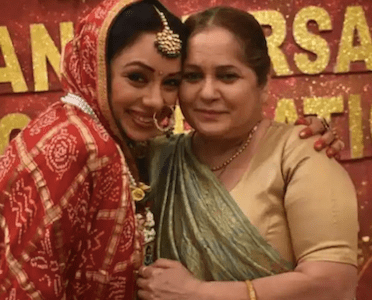 Madhavi Gogate, who portrayed Rupali Ganguli in the show 'Anupamaa,' has died. According to sources, the actress recently tested positive for COVID-19.

Also Read: CUTEST Video: Shaheer Sheikh becomes a ‘Barber’, Know how Hina Khan and Erica Fernandes reacts
The seasoned actress had been brought to the hospital and was recovering, according to reports. However, her health worsened, and she died in the afternoon.
Also Read: American Music Awards: BTS & Coldplay Rock With Their Debut Performance ‘My Universe’ 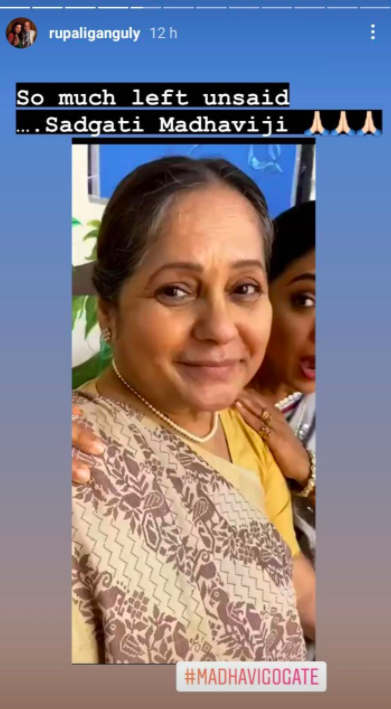 Rupali Ganguly, the senior actress's former co-star, commented on her social media account. She said, ”So much has been left unsaid. Madhaviji Sadgati”

Madhavi's friend and renowned actress Neelu Kohli also wrote an emotional post for her. "Madhavi Gogate my dear friend nooooo.I can't get down to believing that you have left us .Heartbroken @gogatemadhavi you were too young to go.Damn Covid. P.S:I wish I had picked up that damn phone and spoken to you when you did not reply to my msg. All I can do is regret now."


Mehul Nisar, who played Gogate's son in 'Anupamaa,' also expressed his condolences over her death. He captioned a photo of himself with the late actress, "Shocked..! Numb..! Unbelievable..! Madhaviji has left us."

Sheela Sharma, Delnaaz Irani, Yesha Rughani, Rushad Rana, and Aashish Mehrotra were among the celebrities who left comments on the page to express their condolences."Oh dear so sorry to hear this God Almighty rest her departed soul in Peac," Sheela Sharma commented.
Madhavi died in Mumbai's Seven Hills Hospital at the age of 58. Madhavi has appeared in a lot of movies and TV series. 'Ghanchakkar,' a Marathi film in which she co-starred with Ashok Saraf, was her debut. Her most popular plays were 'Bhramacha Bhopala' and 'Gela Madhav Kunikade.’
Her debut appearance on Marathi television was in 'Tuza Maza Jamtay.'
Madhavi has also appeared in series like 'Koi Apna Sa,' 'Aisa Kabhi Socha Na Tha,' and 'Kahin Toh Hoga.'
According to sources, the actress recently tested positive for COVID-19.

Our deepest condolences to Madhavi's family.