Shaheer Sheikh posted a video of his two-month-old daughter Anaya getting her first haircut. See it here. 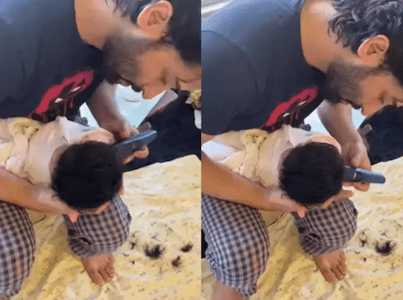 Shaheer Sheikh released a video of his two-month-old daughter Anaya getting her first haircut on Instagram. He was seen holding her on his lap and carefully clipping her hair in the video.

Fans also showered love on the video. “Omggg!!!! We got a little glimpse of baby Anaya!!!!! Howe cutee! Papa Sheikh supremacy! God bless her,” one wrote. “She resembles you soooooo much and she has gotten silky smooth hair just like you @shaheernsheikh,” another wrote. “Bestest video I have seen today. Just love it @shaheernsheikh,” a third fan wrote.

On September 10, Shaheer and Ruchikaa welcomed their daughter Anaya into the world. He claimed in an interview with a leading daily that he adores children and has always wished for a young daughter. "I was ecstatic to learn (about the pregnancy) since I've always adored children. I have three nieces and one nephew that I have looked after for months, some from their birth. It's simply incredible. When I'm with kids, I can be myself," he explained.
"I might spoil my child," he stated when asked what type of father he would be to Anaya. But I'm also aware that I'll never put my opinions or thoughts on my child.”
Last November, Shaheer and Ruchikaa married in a court wedding. Navya is one of his most well-known performances... Naye Dhadkan Naye Sawaal, Mahabharat, Kuch Rang Pyar Ke Aise Bhi, and Yeh Rishtey Hain Pyaar Ke are some of the most popular TV shows.