All about Shooter Avani Lekhara, the first Indian woman to win gold at Paralympic Games

The Jaipur athlete was injured in a car accident in 2012 when she was just 11 years old and suffered spinal cord injuries. The serious injuries left her in a wheelchair. 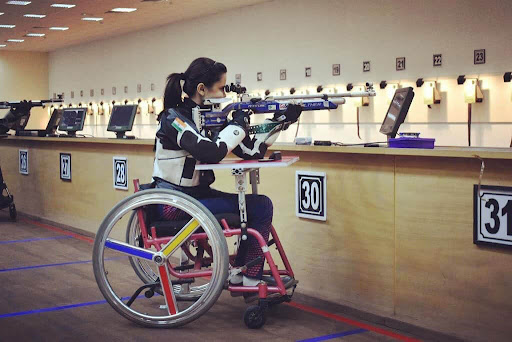 Indian shooter Avani Lekhara has won India's first gold medal at the Tokyo Paralympics by taking first place in the R-2 women's 10m Air Rifle Standing SH1 event. The 19 year old scripted history as she became the first Indian woman to win gold at the Paralympics, and the fifth Indian overall to win the top medal at the Games.
Lekhara equalled the world record set by Ukraine's Iryna Shchetnik in December 2018 with a total score of 249.6 in the final.

Avani Lekhara got out to a strong start in the final, scoring consistently above 10 points. Only two of Avani's shots in the first competition stage got less than ten, helping her to 2nd spot.

Avani had earlier finished seventh in the qualification round with 621.7 points. The young shooter, on the other hand, recovered admirably to reach the event's final.
Shooters in the SH1 Rifle category can hold a gun with arms. Athletes with leg impairments, such as amputations or paraplegia, compete. Some athletes will participate while seated, while others will compete while standing.

The Jaipur athlete was injured in a car accident in 2012 when she was just 11 years old and suffered spinal cord injuries. The serious injuries to her spine caused by the accident left her in a wheelchair.

Born on November 8, 2001, started shooting in 2015 at Jagatpura Sports Complex in Jaipur, India.

Her father encouraged her to take up a sport after she got injured. She tried shooting and archery at first. But, later discovered that she enjoyed shooting more.
She was inspired by the book of legendary Olympic gold medalist Abhinav Bindra and resolved to follow her idol and win gold for her country.

Her motto is "Life consists not in holding good cards, but in playing those cards you hold well."

The GoSports Foundation in India awarded her the Most Promising Paralympic Athlete in 2019.

In 2020, the COVID-19 pandemic had impacted not only her shooting practice but also her vital physiotherapy routine.

"As someone with a spinal cord disability, I don't have any feeling below my waist. I still need to exercise my legs every day. I used to have a physio who would come to my home daily to help me exercise and stretch my legs. Since then it's my parents who have to help me with those exercises. They do the best they can. My physiotherapist has to travel from across Jaipur to come to where I stay. It's a long way for her to travel. For shooting training, as I can't do live firing at home, I do a lot of dry firing and wall holding which we can do without pellets and ammunition. And these will also build my core muscles,” told Lekhara to a reputed Indian media outlet.