Argentina cruised to a 3-0 victory against Bolivia in their 2022 World Cup qualifier on Thursday, with Lionel Messi scoring a hat-trick to overtake Pele as the highest international striker in South American football history. 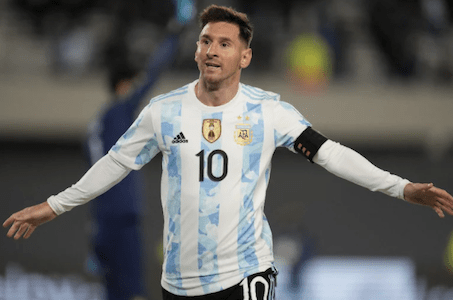 Argentina cruised to a 3-0 victory against Bolivia in their 2022 World Cup qualifier on Thursday, with Lionel Messi scoring a hat-trick to overtake Pele as the highest international striker in South American football history. Messi scored his 77th, 78th, and 79th international goals to keep Argentina on course for a spot in next year's finals in Qatar, where they will face a Bolivian team that is near the bottom of the table. In the 14th minute, the 34-year-old Paris Saint-Germain forward, who was making his 153rd appearance for Argentina, pulled level with Pele's long-standing record of 77 goals, nutmegging a defender and curving a stunning drive past Bolivia goalkeeper Carlos Lampe. 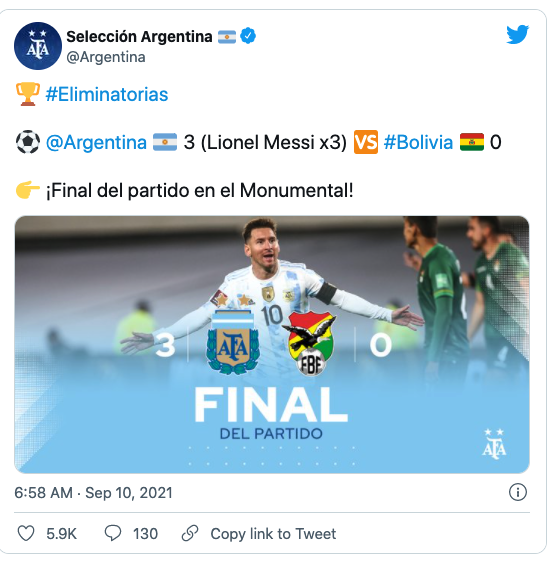 In the 64th minute, the Argentina captain scored his second of the night, sprinting into the Bolivian area and playing a one-two with Lautaro Martinez before slotting away a close-range goal.

Messi completed his seventh international hat-trick two minutes from time, burying a rebound from close range after Lampe just parried a shot from the edge of the box.

Cristiano Ronaldo, a big rival of the former Barcelona player, holds the all-time record for goals scored in international football, with 111 from 180 matches.

Also Read: Approached Kohli for the ball as I wanted to create pressure: Bumrah

The win comes just four days after Argentina was involved in a COVID-19 issue with regional rivals Brazil in Sao Paulo, with the two teams' qualifier on Sunday being called off after seven minutes due to the controversy.

After protesting the involvement of England base players Cristian Romero of Tottenham , Giovani Lo Celso and Aston Villa's Emiliano Martinez and Emiliano Buendia, the game was called off.

After being dismissed from the Argentina Football Association's team, all four players charged by Brazil of falsifying entry records to the country did not play in Thursday's game in Buenos Aires.

There was no indication of a hangover from Argentina's players' squabble on Thursday, as Messi promptly took centre stage to smash Brazilian legend Pele's record.
Argentina may have scored more goals if Messi had been in top form.

Lautaro Martinez of Inter Milan, who had a goal ruled out for offside in the first half, should have scored after being set up by Messi with a great chance on 39 minutes, but dragged his shot wide from close range.

In the first half, Messi should have added a second goal after skillfully connecting up with PSG teammate Angel Di Maria before blazing a curling effort just wide.

However, Argentina strolled to victory because to Messi's goals in the second half.