Dhoni is taking advantage of his time off after spending the previous two months on the cricket field. 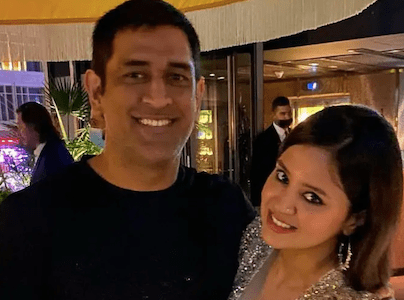 After a hectic few months with Chennai Super Kings and the Indian cricket team, Sakshi Dhoni provided a glimpse of MS Dhoni's downtime. Sakshi disclosed the name of the couple's new pet, Honey, while on a 'chai date' with the great cricketer. The touching message touched many people's emotions and quickly went viral on social media. The unique post featured a rare glimpse of Dhoni's private left, something the cricket legend rarely shares on social media.

He served as a 'mentor' in the Indian dressing room during the just concluded 2021 T20 World Cup in the UAE. India, on the other hand, fell short of expectations in the event, failing to get to the semi-finals and was eliminated in the Super 12 stage.
Dhoni resigned from international cricket last year, and this was his first non-playing assignment with the squad. He last played for India in an international match in the Men in Blue's sad semi-final loss to New Zealand in the 2019 Cricket World Cup.
Dhoni's future as a player is unclear, and it's unclear whether he'll play for CSK in the IPL in 2022. The four-time IPL champions are yet to make an official announcement about their intentions for 2022 season.
With two newcomers to the league next year, the league is poised for a mega-auction, with the majority of players expected to participate. Dhoni has stated that he will continue with the CSK camp in some capacity, but it is unclear whether this will be as a player.