Sumit Antil bagged a Gold medal in the men’s javelin throw (F64) event. Gold Medallist’s aim to join the army was scattered after he lost his left leg in an accident. 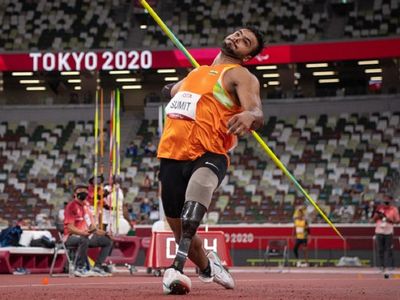 On Monday, India para-athlete Sumit Antil bagged a Gold medal in Tokyo Paralympics 2020, in the javelin throw (F64) event. His performance was historic as he threw the javelin 66.58 metres away. After his mind-blowing performance, he was interviewed by media channel TOI, where he said that he wanted to join the Indian Army but his dreams were shattered after he met with an accident.

He further said that he had rejected several government jobs to join the Indian Army.

He said, “If I had my left leg, I would have been a wrestler. I wanted to join the Indian Army through the sports quota. I rejected many government jobs because of this. But the accident shattered my dreams of joining the Indian Army.”

He added and said that his inspiration is Gold medallist Neeraj Chopra. He said, “Thank you to him (Neeraj) for inspiring me. I still remember those encouraging words. Neeraj said you have the ability to do well and he was confident that I will win a medal in Tokyo. He said bhai tu pakka medal leke ayega, dekh lio (Brother, you will surely win a medal).”

After winning a gold medal at the ongoing Tokyo Paralympics, javelin thrower Sumit Antil on Monday said that he is satisfied with his performance but wanted to touch the 70m mark.

On Monday, Prime Minister Narendra Modi telephoned gold medallist Sumit Antil and congratulated the javelin thrower for his spirit of resilience at the ongoing Tokyo Paralympics.

He took Twitter and congratulated the athlete. His tweet read, “Our athletes continue to shine at the Paralympics! The nation is proud of Sumit Antil’s record-breaking performance in the Paralympics. Congratulations Sumit for winning the prestigious Gold medal. Wishing you all the best for the future.”

Meanwhile, the Haryana government has announced that it will honor gold medalist javelin thrower, Sumit Antil, with a cash reward of Rs 6 crore and silver medalist discus thrower Yogesh Kathuniya with Rs 4 crore.