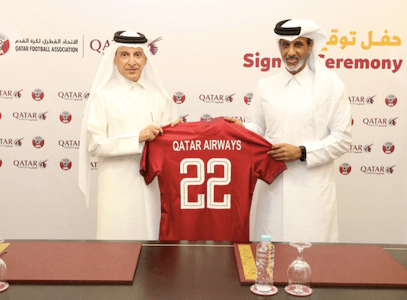 
Several abroad competitions have been attended by players and coaching personnel from all age categories of the national squad. The senior team recently competed in the FIFA World Cup European Qualifiers as a guest nation, competing in Group A alongside Azerbaijan, Ireland, Luxembourg, Portugal, and Serbia.
Following a great debut in the 2019 CONMEBOL Copa America, the senior team has also performed well in international tournaments, reaching the semi-finals of the CONCACAF Gold Cup 2021 in the United States. The team took first place in Group E of the 2023 Asian Cup qualifications.
Meanwhile, the U-23 national team continued the tradition by qualifying for the AFC U-23 AFC Asian Cup Championship in 2022 in Uzbekistan.


"Our support for Qatar Football Association originates from our country's collective enthusiasm for football," stated H E Al Baker, CEO of Qatar Airways Group. We want to keep loyal to our purpose of uniting people through sport, and what better way to do so than by supporting our national football teams? In recent years, our national teams have improved to the point that they can compete with the finest in the world. We want to continue to be there for them at every step of the way."
"Qatar Airways is regarded a critical partner in continually offering high-quality service, always exceeding our expectations," stated QFA President Sheikh Hamad. We appreciate the airline's cooperation and are pleased with the partnership renewal with Qatar Airways for more two years.

Qatar Airways will sponsor the Arab Cup, the region's premier tournament featuring 16 Arab nations, from November 30 to December 18.
The Concacaf Gold Cup in 2021 and UEFA Euro 2020 are both sponsored by Qatar Airways. The airline also boasts a diverse global sports relationship portfolio that includes FIFA, CONCACAF, and CONMEBOL, among others.
Qatar Airways, as FIFA's Official Partner, has sponsored major events like as the FIFA Club World Cup 2019 and 2020 editions, as well as the FIFA World Cup Qatar 2022.
Al Sadd SC, Boca Juniors, FC Bayern München, K.A.S. Eupen, and Paris Saint-Germain are just a few of the world's most famous football clubs.