An anchor's gaffe during live News Bulletin sparked a meme fest when he mistakenly said that Congress leader Rahul Gandhi will open for India in the T20 World Cup 2022. 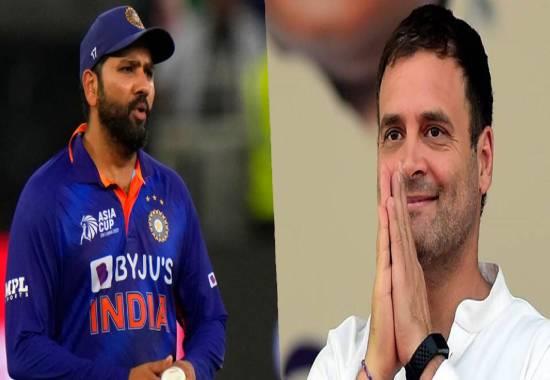 As the road to T20 World Cup 2022 for Team India will start with a 3-match T20 home series against defending champions Australia, fans are eagerly waiting for the ICC's mega-event. While the Team India squad for T20 World Cup 2022 which is going to be held in Australia has already been announced by the BCCI, some fans are happy while some are not, especially Sanju Samson's admirers. The 'Men in Blue' is all set to play back-to-back cricket, however, on Monday an anchor's gaffe during live News Bulletin sparked a meme fest when he mistakenly said that Congress leader Rahul Gandhi will open for India in the T20 World Cup 2022.

A user wrote, "Rahul Gandhi and family are good at closing India not opening"

Rahul Gandhi and family are good at closing India not opening 😂

Shami ruled out of T20Is against Australia due to Covid-19, Umesh named replacement

Another user wrote, "He isn't even opening account for Congress bruh!"

Coming to what actually Team India skipper Rohit Sharma said- "In the last match we saw what he (Kohli) did (as opener) and we are obviously happy about that," Rohit said recalling Virat's unbeaten 122 against Afghanistan. He further added, "K L Rahul will open for us at the T20 World Cup. We are not going to experiment with that position a lot." Rohit defended his teammate claiming Rahul’s performance often goes unnoticed.

“His performances often go noticed. He is a very important player for India. If you look at his performances over last two-three years, it has been very good. I want to make it clear to everyone that we have absolute clarity on this and we know it very well. There is no confusion," he said.

“We are clear what KL brings to the table for us. He is match winner for us as well. We have not picked a back-up opener and Virat can obviously open for us. He has done that well for his IPL franchise over the years," he added.