On the day of his trial in France on allegations of participation in blackmail, Karim Benzema scored as Real Madrid beat Shakhtar Donetsk 5-0 in the Champions League on Tuesday. 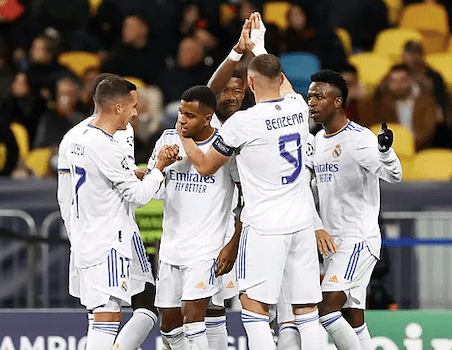 On the day of his trial in France on allegations of involvement in blackmail, Karim Benzema scored as Real Madrid beat Shakhtar Donetsk 5-0 in the Champions League on Tuesday. Serhiy Kryvtsov's own goal in the first half set Real on their way, and Vinicius Junior added two more goals before setting up Rodrygo for the fourth. In a game played in Kiev, Benzema added the fifth goal in injury time.

In a case known as the "sextape controversy," the French international striker stands on trial in France on Wednesday with four other men accused of participation in the attempted blackmail of his former international teammate Mathieu Valbuena.

Also Read: Australian Open: Andrews says 'Won't get a visa’ after Novak Djokovic declined to reveal vaccination status
It's unclear if Benzema will be there when the trial begins.
It was a much-needed victory for Real, the 13-time European champions, after they were humiliated at home by Moldovan underdogs Sheriff Tiraspol in their previous encounter.
Sheriff lost 3-1 against Inter Milan on Tuesday, but Real Madrid remains second in Group D with six points to Sheriff's six.
"After the loss at home, this was a crucial game. We played well, scored goals, and did not surrender, so it was a positive outcome for us "Benzema explained. "Let's hope I can keep going like this, helping my team on the field; I want to win, and if I can contribute with goals, that'll be great for everyone."
Ancelotti was delighted with his team's performance, but cautioned against getting too excited ahead of LaLiga's most important rivalry.
"It's tough to single out one individual because everyone performed admirably. We defended well, were focused from the beginning, and executed our approach effectively. On the break, the team was quite dangerous. It's a game that gives us confidence, which is natural, but it's a different game and a different story versus Barcelona."