‘Will wait for the announcement to take effect’, says Samyukta Kisan Morcha as it welcomes PM Modi’s decision

Politicians and framer unions have welcomed the prime minister’s decision. 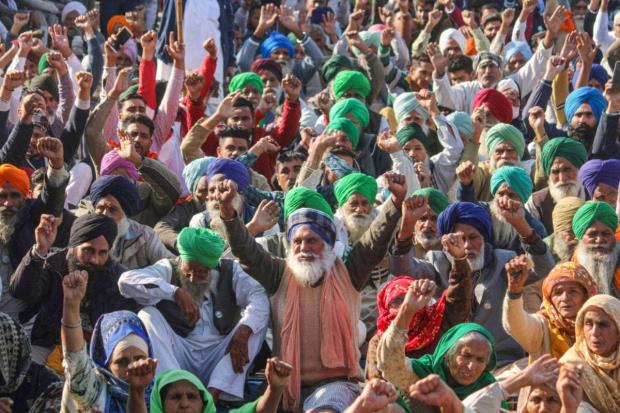 The entire country is rejoicing as Prime Minister Narendra Modi on Friday announced the withdrawal of the three controversial farm laws. Saying that his government is doing its best to improve the financial well-being of the farmers and committed to serving them, with a feeling of sorrow in his voice he also accepted that he was not able to convince the farmers despite putting tremendous efforts.

PM Modi has urged the protesting farmers to return back home and that the centre will continue to work for the welfare of the farmers in the country.

Politicians and framer unions have welcomed the prime minister’s decision. 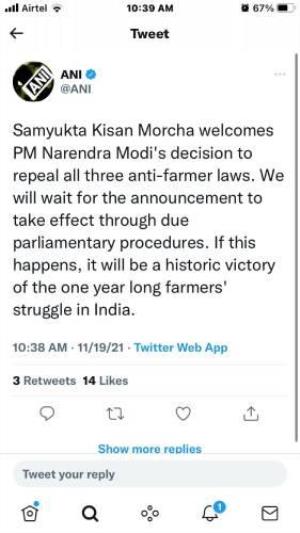 Welcoming PM Modi’s decision, Samyukta Kisan Morcha in a statement said, “We welcome PM Narendra Modi's decision to repeal all 3 anti-farmer laws; will wait for the announcement to take effect through due parliamentary procedures. If this happens, it will be a historic victory of the one year long farmers' struggle in India.”

“SKM also reminds the Prime Minister that the agitation of farmers is not just for the repeal of the three black laws, but also for a statutory guarantee of remunerative prices for all agricultural produce and for all farmers. This important demand of farmers is still pending,” the SKM added in the statement.

The statement further read, “However, nearly 700 farmers have been martyred in this struggle. The central government's obstinacy is responsible for these avoidable deaths, including the murders at Lakhimpur Kheri.”

“So also is the withdrawal of the Electricity Amendment Bill. SKM will take note of all developments, hold its meeting soon and announce further decisions.”

Speaking to news agency PTI,  Joginder Singh Ugrahan, the leader of BKU's Ugrahan faction, said, "It is a good move by Prime Minister Narendra Modi on the occasion of Gurpurab.”

On being asked if the farmers will return to their homes on Prime Minister’s appeal, Ugrahan said, "Farmers' unions will sit together and decide the future course of action."

BKU (Ugrahan) was amongst the largest protesting farmers unions that have been camping at the Tikri border. The union has a sizable presence across Punjab state.

Another farmers union, Kisan Ekta Morcha has also appreciated Modi’s move. Its tweet says, “And its a WIN, after long 1 year!! Modi Govt decides to REPEAL ALL 3 FARM LAWS- says PM Modi. Unity & Justice Is On Its Way to Success #VictoryForFarmers #FarmersProtest #KisanMajdoorEktaZindabaad