Sara Ali Khan and Kusha Kapila tried their hand at the Red Light Green Light game, which was featured in a new reel in Squid Game. 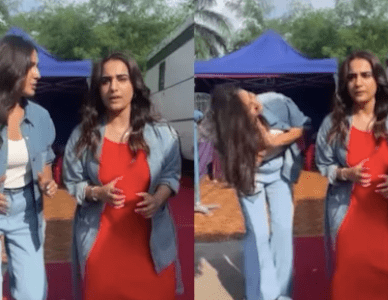 One person instructs the others to run (green light) and stand still (red light) as part of the game . Anyone who is seen moving will be eliminated, or in the case of the Squid Game, killed.
Also Read: Aryan Khan drug case: NCB’s Sameer Wankhede alleges he’s being spied on, files complaint

Sara and Kusha play the game in the clip. Kusha turns to Sara and channels her inner paparazzi as they come to a standstill, trying to avoid being eliminated. Kusha constantly repeats, "Hello, Sara ma'am, ek baar hello bol do Sara ma'am (say hello once Sara ma'am)." Sara attempts to maintain her composure but eventually gives up and bows down with folded hands, much like she does when she meets the media. Sara is eliminated at the end of the video.
Also Read: Big B terminates contract with tobacco brand, says “Wasn't aware it falls under surrogate advertising”
Sara captioned the video, "if Sara Ali Khan was in Squid Game?" Her greeting style  would be the same.”
Squid Game is a Korean survival programme that premiered just a few weeks ago. The show follows 450 contestants as they compete in a series of games in order to survive and win a grand prize. The nine-episode Netflix series has quickly become one of the year's most popular. The series is ranked first among India's Top 10 titles.
Sara was last seen in Coolie No. 1 earlier this year. Coolie No. 1, which starred Varun Dhawan and was distributed digitally, was slammed by reviewers. Last year, she was also seen in Love Aaj Kal. Sara is presently working on Atrangi Re.
Atrangi Re, directed by Aanand L Rai, stars Sara in a dual role. It also stars Akshay Kumar and Dhanush.  '