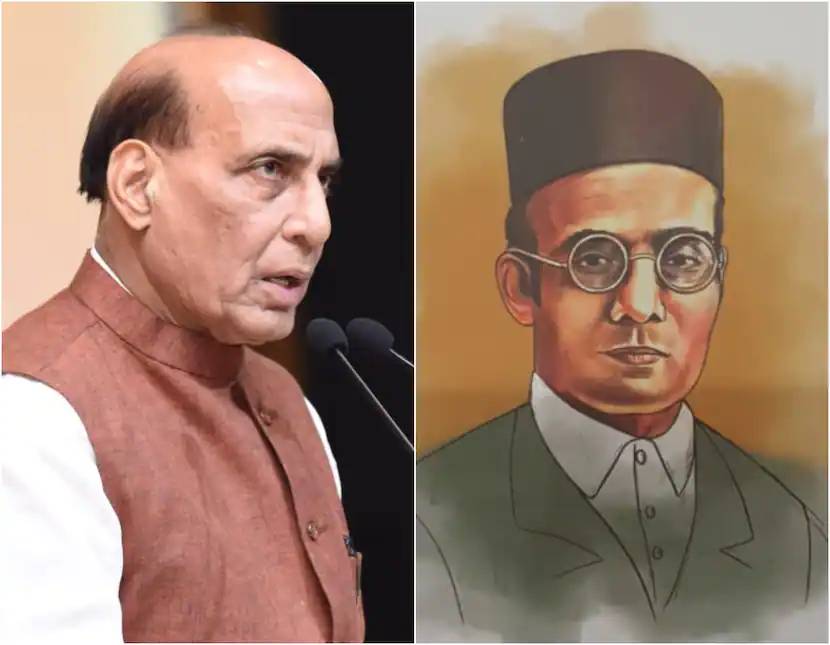 Taking a swipe at the critics of Vinayak Damodar Savarkar, Defence Minister Rajnath Singh on Tuesday said the freedom fighter’s image is being maligned over the mercy petitions he filed during British rule in India.

He said, "Lies were spread about Savarkar" and that Mahatma Gandhi had requested him to write mercy petitions.

Hailing Veer Savarkar as a staunch nationalist and India's first military strategist in the 20th century, Mr Singh said that it was on Mahatma Gandhi’s request that he wrote the mercy petitions to the British and it was people from the Marxist and Leninist ideology who falsely accuse him as a fascist.

Describing Savarkar as a "national icon" at an event to release a book on him, Rajnath Singh said he gave India a "robust defence and diplomatic doctrine".

Also Read: How did Vinayak Damodar Savarkar gets title of “Veer”? Remembering the great revolutionary on his 55th death anniversary

Calling the hatred towards Savarkar illogical and baseless, Mr Singh said:  "He was an icon of Indian history and will remain so. There can be a difference of opinion about him, but to look down on him as inferior is not appropriate and justifiable. He was a freedom fighter and a staunch nationalist, but people who follow the Marxist and Leninist ideology are the ones who accuse Savarkar of being a fascist.”

While calling Savarkar a freedom fighter, the Defence Minister said his commitment towards the country’s freedom was so strong that the British had sentenced him to life imprisonment twice.

"Mahatma Gandhi had then said that Savarkar should be released. The way we are carrying out a peaceful movement to gain freedom, Sarvarkarji should also be allowed to do the same," Rajnath Singh said.

He went on to say that Savarkar was right in saying that India’s relations with other countries should depend on how helpful those ties are to India’s security and its interests, irrespective of the kind of government in those countries.

Further explaining Savarkar’s concept of Hindutva, Mr Singh said the word “Hindu” for him was not connected with any religion but was linked to India's geographical and political identity, adding that Savarkar correlated Hindutva with cultural nationalism.

"For Savarkar, an ideal state was the one where its citizens were not differentiated based on their culture and religion and therefore, there is a need to deeply understand his Hindutva," the senior BJP leader said.

Also Read: SavarkarJayanti: Was Savarkar a British stooge or a strategic nationalist?

Reverberating similar thoughts about Savarkar, RSS chief Mohan Bhagwat asserted that his ideas of Hindutva never proposed to distinguish between people based on their culture and methodology of worshipping the god. "Savarkar used to say, why do we differentiate? We are the sons of the same motherland, we are brothers. The different methodologies of worship have been the tradition of our country. We have been fighting for the country together," stated Bhagwat.

Emphasizing that Savarkar was not an enemy of the Muslims, the RSS chief said he had written many ghazals in Urdu.