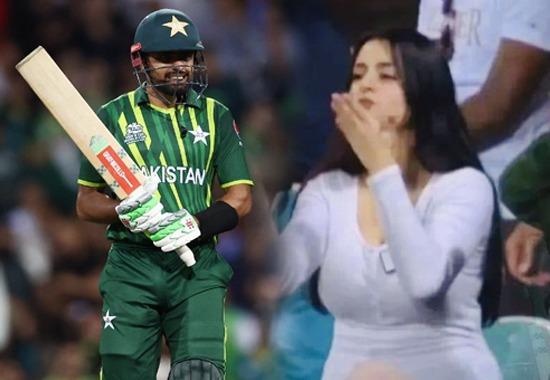 Pakistan vs New Zealand T20 World Cup 2022 Semi-final match turned out to be a one-sided match in the end, with Babar Azam & Co defeating Kane Williamson-led squad to enter the final of the elite tournament. In short, Pakistan defeated New Zealand by 7 wickets at the Sydney Cricket Ground (SCG) and secured their birth in the T20 World Cup 2022 final. However, it was a female Pakistani fan who has been buzzing on social media after she gave a flying kiss to Pakistani skipper Babar Azam.

After T20 Wc 2022 first semi-final, Pakistani fan flying kiss video started buzzing on social media and netizens praised the girl for her beautiful face. When Babar Azam was returning to the pavilion after being dismissed by Trent Boult, the camera panned to the crowd and the female fan was spotted giving her flying kiss to the Pakistani captain. Ever since then, the Pakistani female fan has hogged the social media limelight. Notably, it was Babar Azam and Mohammed Rizwan's blitz at the start that did not let New Zealand show a fightback in the second innings.

Pakistani female fan video started spreading like a wildfire and fans started to search for her social media account. Finally, the fan addressed the social media fame she got overnight and expressed her gratitude.

Thankyou so much for the Love 🇵🇰💚 pic.twitter.com/HtiCqmSVlw

Coming to Pakistan vs New Zealand match, Mohammed Rizwan was adjudged Man of the match for his fiery fifty at the top. During the presentation ceremony, Rizwan said, "Luckily, the fifty was in the semifinal. Babar and I were struggling but we worked hard and believed. We kept fighting. When we crossed the boundary line, we decided to take the attack to the new ball bowlers. When we finished the powerplay, we knew one of us had to bat deep as it was a tricky pitch. Our start (to the tournament) wasn't good, but the guys kept believing."