The Kapil Sharma Show had Govinda and his wife Sunita Ahuja as guests. While he failed to answer questions about her, she claimed to know all there is to know about him, even the colour of his underwear. 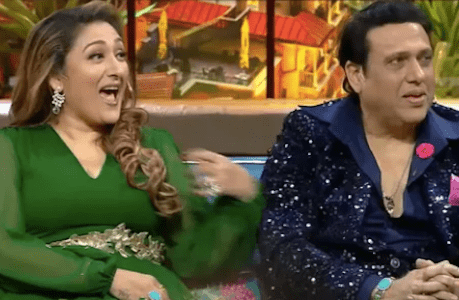 Govinda and his wife, Sunita Ahuja, will be guests on The Kapil Sharma Show in the coming episodes. Kapil Sharma asked Govinda a series of questions regarding Sunita's look, including the colour of her earrings and nail polish, in a commercial released online by Sony Entertainment Television, but he couldn't answer any of them.

Kapil had previously questioned Sunita if she had ever bumped into Govinda in an unusual place where she should not have. “Kabhi aaj tak pakda nahi gaya main (I have never been caught to date),” Govinda said, looking at Sunita.
Govinda and Sunita married in 1987, and they have two children, Tina and Yashvardhan. In the company of their close friends, they repeated their wedding vows in London on their 25th anniversary.
Also Read:
Govinda’s wife Sunita slams Comedian Krushna Abhishek: ‘Don't want to see his face’
Meanwhile, Krushna Abhishek, Govinda's nephew and a cast member of The Kapil Sharma Show, will not appear in the episode featuring Govinda with Sunita. Since 2016, Govinda and Krushna have had a tense relationship.
Krushna said in an interview that he has been managing the shooting of his forthcoming film with The Kapil Sharma Show. “However, I didn't want to be a part of it when I found out they (Govinda and Sunita) would be appearing as celebrity guests in the future show, so I didn't try to change my dates. He had added, "I believe both parties do not want to share a stage."