Although Mura gave an early gift, a nearly entirely rotated lineup from Sunday's defeat at Arsenal made an immediate impact. 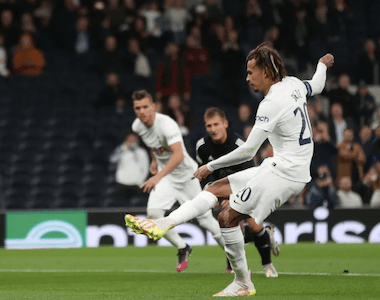 Tottenham Hotspur defeated Slovenia's N Mura 5-1 at Tottenham Hotspur Stadium in its first win in the UEFA Europa Conference League group round. Dele and Giovani Lo Celso scored twice in the opening 10 minutes to put the hosts up for the most of the game, but substitute Harry Kane added insurance goals with a hattrick in the second half.

Although Mura gave an early gift, a nearly entirely rotated lineup from Sunday's defeat at Arsenal made an immediate impact. Matko Obradovi, the goalkeeper, made a clear foul on Dele in the third minute, resulting in a penalty kick, which Dele converted for a 1-0 lead. Mura's shaky start to the game only grew worse five minutes later , which Lo Celso put the hosts 2-0 up after scoring from a tight angle on the left side of the goal.
Also Read: IPL 2021,CSK vs SRH Match 44: Chennai crush Hyderabad by 6 wickets, qualified for playoffs
Spurs remained the superior team after the opening flurry of goals, but Mura grew more organised. After that, the first half was uneventful, with Dele creating one more important chance in the 33rd minute, which was finally saved.
Also Read: Former UFC champ Jon Jones arrested on domestic violence charge
Mura turned over early misfortune in the first half with a fantastic stroke of luck to open the second, reducing the advantage in half in the 53rd minute when iga Kous scored from distance. Spurs manager Nuno Esprito Santo appeared to be spurred by conceding to play his first-choice attackers, bringing on Kane, Son Heung-min, and Lucas Moura six minutes later.
Kane scored a hattrick in 20 minutes after coming on as a substitute. The first came in the 68th minute, when Kane finished from close range after receiving a cross from Lucas. Just eight minutes later, Kane and Son collaborated for a second goal, with Son delivering a square pass to Kane for the finish. Kane accomplished his hat trick in the 88th minute with an easy finish after collecting the ball from Lo Celso.
Spurs are now in first place in Group G, ahead of Rennes on goal difference.

Thoughts on the Match
Spurs were unquestionably the better team throughout, although they struggled to go forward for the whole of the first half. Although eight first-half shots aren't insignificant, the offensive strategy appeared to be once again hazy.
Kane hasn't had a great start to the season, but he's still the team's greatest offensive option. Spurs will need an in-form Kane, along with Son and Lo Celso, to be successful this season, and the second half gave a preview of what they will require.
Dele, in addition to Kane, Son, and Lo Celso, had a memorable night. Individually, though, almost everyone did quite well.