The Tripura leader called the act of head tonsuring a "penance for the misdeeds" of the BJP-led government in the state. 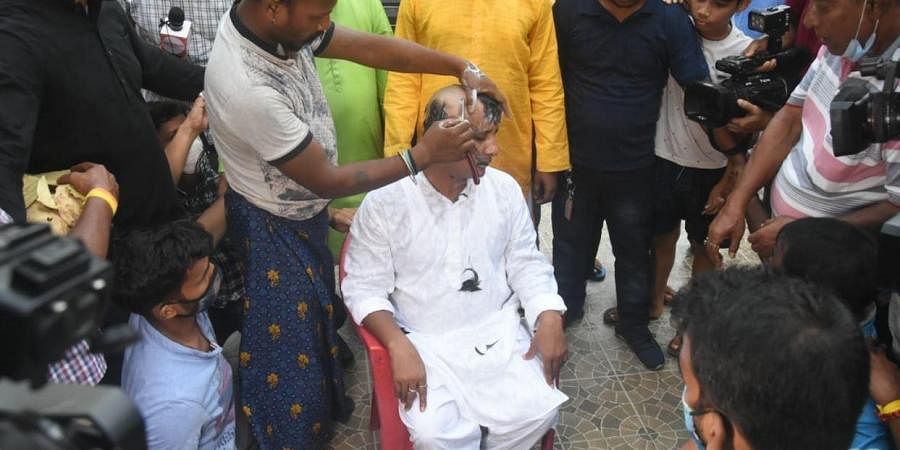 BJP leader from Tripura, Ashis Das on Tuesday shaved his head, took a dip in Ganga and offered his prayers at a temple that is near to West Bengal Chief Minister Mamata Banerjee’s home, saying all these are an act of penance before joining the Trinamool Congress, ruling party in Bengal.

The Tripura leader called the act of head tonsuring a "penance for the misdeeds" of the BJP-led government in the state. He performed yagna at Kolkata's popular Kalighat temple.

BJP promotes "political anarchy and chaos" in Tripura, Mr Das accused the party, citing that people are not happy with the state government's performance. Hence, he has decided to leave BJP.

Ashish Das has been in touch with the TMC for several months.

He represents the Surma constituency.

In the past, Das has several times praised Mamata Banerjee, even pitched her for Prime Minister’s post and since the past two years has remained a strong critic of Tripura Chief Minister Biplab Deb.

It is speculated that Mr Das will join TMC soon which has been eyeing to gain paper in Tripura.

The northeastern state will vote in early 2023.

"Today I have tonsured my head as penance for the misrule of the BJP government. I have decided to leave the party and time will decide my next step. But the type of anarchy and misrule Tripura has witnessed under the BJP-led regime has moved me and therefore for the past two years, I have been a critic of all these wrong deeds and I have been working for the people beyond the party and politics," said Ashis Das.

Meanwhile, Tripura BJP sources have indicated that disciplinary action will be taken against Mr Das.

The Tripura MLA while talking to the media in Kolkata also criticised Prime Minister Narendra Modi for "selling most government properties to private parties".

"Once Modi's messages stirred and touched the minds of people from all sections across the country. Modi had once said 'na khaunga, na khane dunga'. But now, it has become a popular jumla in the country," he said.

He further said that he, like many others from Tripura trusted BJP to end the “misrule of the Left Front government” led by Manik Sarkar, but that was a mistake, he said, adding, “I will keep my head shaved till the BJP government is ousted in 2023. Today, I took a dip in the Ganga and offered prayers at the Kalighat temple because joining the BJP was a crime,” said Das.

The problem in Tripura is not only because of Biplab Deb alone, but the BJP’s national leaders who keep visiting states in the northeast and have done nothing to solve issues faced by the people in this region, said Das.

Das on Tuesday afternoon had a meeting with Abhishek Banerjee afternoon and he is likely to join the TMC on Wednesday.

Taking a dig at Ashish Das, BJP national vice-president Dilip Ghosh said, “We will see how he goes through his penance in the TMC.”