After being sent off in the final minute for fighting with referees as 10-man Barcelona dragged to a goalless draw, the Spanish Football Federation (RFEF) decided to give the Dutchman the shortest possible punishment. 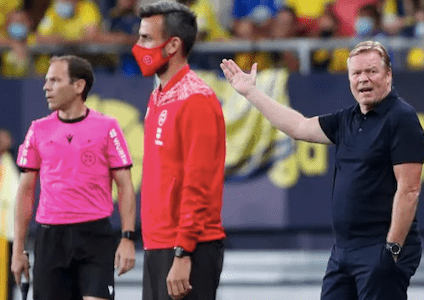 Barcelona coach Ronald Koeman was given a two-match suspension on Friday as a result of his red card the night before in a 0-0 draw with Cadiz.

After being sent off in the final minute for fighting with referees as 10-man Barcelona limped to a goalless draw, the Spanish Football Federation (RFEF) decided to give the Dutchman the shortest possible punishment.
Also Read: La Liga Valencia vs Real Madrid: Ancelotti salutes his team’s fighting spirit after late win over visitors
According to referee Carlos del Cerro Grande's report, Koeman was sent off for "protesting to the fourth official in an ostentatious manner, with his arms raised, shouting and leaving the technical area, complaining: 'hey, the referee has to whistle, the referee has to whistle, dammit, he has to whistle,' even though he had already been warned by the fourth official to stop protesting at the referee."
Because there were two balls on the pitch, Koeman requested that play be halted.
Also Read: Europa Conference League: Tottenham Hotspur could be short of attackers after double injury
"In this country, you get sent off for nothing," Koeman explained at the post-match press conference, explaining that "it was for telling the fourth official that there was a second ball on the pitch,that he had to stop the game.”
Barcelona is currently seven points behind Liga leaders Real Madrid, despite having a game in hand, and has only scored five goals in five league matches, putting Koeman under pressure.
On Sunday, when Barcelona hosts Levante, and on October 2, when Barcelona visits champions Atletico Madrid, he will be unable to sit on the bench.
Frenkie de Jong, a midfielder, was also given a one-match suspension by the disciplinary committee.
In the 65th minute, the Dutchman was sent off for his second yellow card in four minutes.