India, who are in Group B, will begin their campaign on October 24 against arch-rival Pakistan. 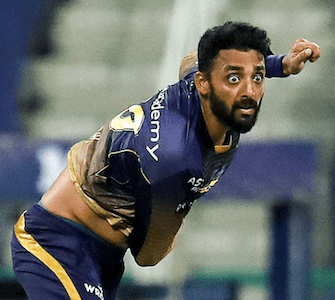 Varun Chakravarthy's fitness is becoming a little concern for India ahead of the T20 World Cup 2021, which will be held in the United Arab Emirates and Oman from October 17 to November 14. Chakravarthy was spotted limping off the field during the second qualifier of the current Indian Premier League between his side Kolkata Knight Riders and Delhi Capitals.
Also Read: IPL 2021 Qualifier 2: KKR beat Delhi Capitals by 3 wickets, to face CSK in final

The 30-year-old, who has been named in India's 15-man squad for the multi-team event, has been in excellent form in the league, taking 18 wickets at an average of 22.77 and a fantastic economy rate of 6.40 in 16 matches. However, having previously failed fitness tests, the leg-spinner has not been one of the fittest players of an otherwise agile Indian side.
Also Read: Much-awaited ICC T20 World Cup set to commence on October 17 in UAE, Oman
Meanwhile, India announced on October 13 that all-rounder Shardul Thakur will be replaced in the T20 World Cup squad by Axar Patel, as well as that eight players – Venkatesh Iyer, Avesh Khan, Umran Malik, Harshal Patel, Lukman Meriwala, Karn Sharma, Shahbaz Ahmed, and K Gowtham – will stay in Dubai after the IPL and join the Indian team's bubble to help them prepare for the marquee tournament.

Hardik Pandya’s participation in T20World Cup:
The Super12 teams have till October 15 to complete their T20 World Cup lineups. "Teams have seven days to alter their teams before the start of their support period. India's support period begins on October 23 with the Super 12. So they have until midnight on October 15 to modify the team," a Board of Control for Cricket in India (BCCI) source told TOI recently.
"It's still up in the air whether Hardik would be dropped entirely if he doesn't get his bowling ready." However, as an allrounder, he is running out of time," the BCCI insider said.
"The selectors will keep an eye on Hardik in the coming days to see how he develops. Because the selectors thought Hardik would be fit enough to bowl his quota of overs, they went with just three true pacers. There is no form to go by because he hasn't bowled in the IPL at all.
India, who have been assigned to Group B, will begin their campaign against arch-rival Pakistan on October 24.