A video of the Ola S1 Pro Electric scooter is surfacing on the internet showing a bunch of riders performing stunts on the bike. 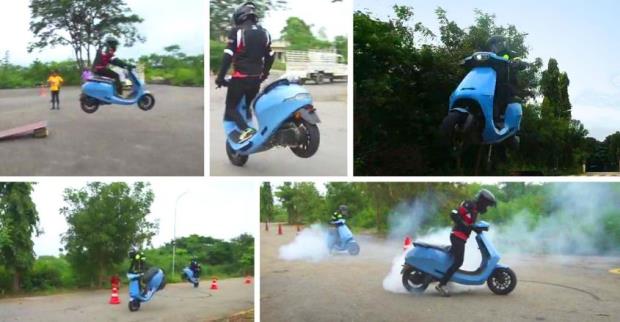 Ola Electric S1 and S1 Pro scooters were launched a month ago and have received an overwhelming response from customers. The firm recently announced that they will be starting test rides for Ola electric scooters as it is expected to begin with the deliveries soon.

Though a delivery date has not been selected yet, a video of the Ola S1 Pro Electric scooter is surfacing on the internet showing a bunch of riders performing stunts on the bike.

Ola's CEO, Bhavish Aggarwal had also shared a clip of this video on his Twitter handle, where two riders are seen doing stunts with experts in command.

The stuntmen performed a series of high jumps, inclined planes, wheelies, donuts as the camera captures the action. The video highlights that riding electric scooters is no less fun than their combustion engine counterparts.

Mr Aggarwal shared the video and wrote, “Having some fun with the scooter!" Further, he gave an update about test drives starting in the coming weeks and their deliveries to begin soon after, he mentioned.

The video shows a few Ola electric scooters on a closed road doing stunts, while a rider can be seen approaching a ramp carrying a good speed and the scooter jumps off the ramps and lands in a clean finish. The stuntman then trunks the scooter around and jumps the scooter from the other ramp. It is clear from the video that the riders are having fun on the bike and the scooter doesn’t seem to struggle a little.
Also Read: Ola Electric sells e-scooters worth Rs 1,100 crore in just 2 days, know next reopen date

The Ola electric scooter is available in two variants - S1 that comes with a 2.98 kWh battery pack and S1 Pro available in a larger battery pack of 3.97kWh. The Ola S1 scooter is priced at Rs 1 lakh while the S1 Pro comes at the price of Rs 1.30 lakh, providing 120 kms and 180 kms of range respectively on every single charge. The ex-showroom price may vary from state to state depending on subsidies on offer.

The e-scooter is being manufactured at its Futurefactory near Chennai in Tamil Nadu.